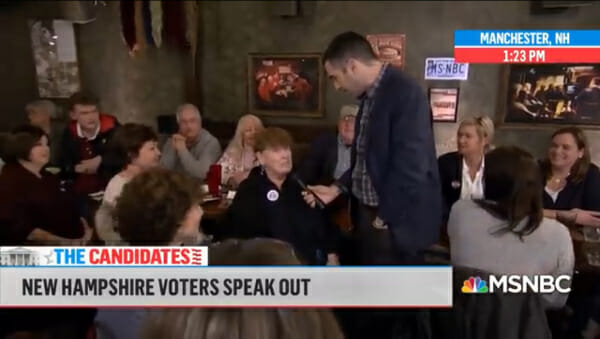 A voter in the New Hampshire primary told an MSNBC anchor that the left-leaning network's criticism of Democratic presidential candidate Bernie Sanders made her "angry enough" to vote for the self-declared democratic socialist senator.

"I want to say the reason I went for Bernie is because of MSNBC," the voter told MSNBC's Ari Melber, the Washington Free Beacon reported.

"The kind of stock Bernie cynicism that I heard from a number of people — I watch MSNBC constantly, so I heard that from a number of commentators. It made me angry enough. I said, OK, Bernie has my vote."

She said it's "completely cynical" of MSNBC analysts "to say that he's lost 50 percent of his vote from the last time when there were two candidates."

"Now there are multiple wonderful candidates who would be great presidents, people that I think we can unify and get behind," she said.

Melber wanted to make sure he understood her.

"What you're saying is, and we take criticism because we're journalists, we have to be open-minded," Melber said. "You're saying hearing from people, guests, contributors, the conversations you've heard that you felt were designed to tear down Senator Sanders or quote-unquote stop him, actually endeared him to you."

"Absolutely," the voter replied. "I could have chosen several candidates, but that's what pushed me over the edge for Bernie."

The Free Beacon noted MSNBC anchor Chris Matthews said Sanders was not a "Good Samaritan" who would stop and help someone in need.

Matthews said that if it comes to a brokered convention, the lead House impeachment manager, Rep. Adam Schiff, D-Calif., becoming the Democratic nominee.

Sanders supporters, pointing to the use of superdelegates and other moves by the Democratic National Committee, charged the primary was rigged. And some are making the same claim in 2020.

"One of the things I'm interested in seeing in 2020 is, how much we will allow Democrats to make their own choice? The story of who the party is supposed to support is not up to us, it's up to Democrats," Johnson said.