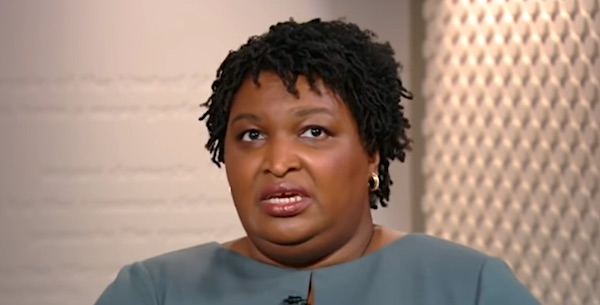 Stacey Abrams, who lost the 2018 governor's race in Georgia to Republican Brian Kemp but refused to concede, now says the nation needs to "go around" its Constitution to take out parts she doesn't like, such as the Electoral College.

The Media Research Center pointed out Abrams was  on ABC's "The View" when she said she wants to "go around the Constitution" to end the "racist" Electoral College, because we don't "have time" to wait for a constitutional amendment.

Stacey Abrams says she wants to "go around the Constitution" to end "racist" Electoral College... because she thinks we "[don't] have time" to wait for a Constitutional amendment. https://t.co/qKNG1481R0

A tweet from "The View" said Abrams "explains why she says the electoral college is a 'classist racist system whose time has passed and we need to get rid of it.'"

.@staceyabrams explains why she says the electoral college is a "classist racist system whose time has passed and we need to get rid of it." https://t.co/iSpno6xps6 pic.twitter.com/3FADf0IM3A

The Electoral College is the constitutional procedure that ensures votes in Kansas and North Dakota are as relevant as those in California and New York.

Without that it – and many Democrat states already it eliminated – the president would be elected by a national popular vote.

The issue came up because "The View" hosts asked Abrams to run for president.

The MRC, at its Newsbusters website, explained: "The hosts let Abrams explain at length her group's work in fighting 'voter suppression.' Abrams ranted about the importance of the census for non-white citizens and immigrants. She even warned illegal immigrants and criminals evading arrest that it was important they answer the census to gain political power.:"

Host Sunny Hostin then asked her about the Electoral College.

"Abrams calmly explained how the left could 'jerry rig the system and go around the Constitution' by using the popular vote, because they 'didn't have time,' to make a constitutional amendment. This question was edited out of the aired show but The View's Twitter account promoted it online."