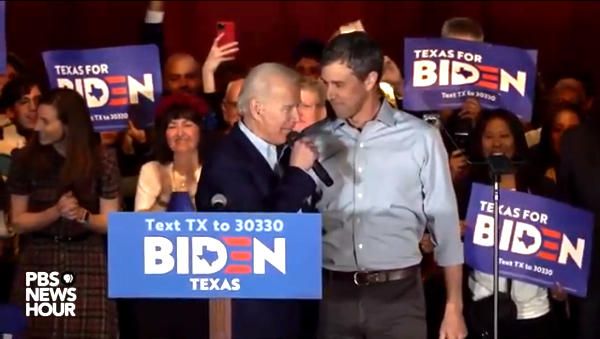 At a rally in Dallas on March 2, 2020, Joe Biden promises to make former Rep. Beto O'Rourke his lead man on gun control if he wins the White House (screenshot)

At a rally in Dallas on the eve of Super Tuesday, a resurgent Joe Biden promised former Rep. Beto O'Rourke -- known for his vow to seize certain firearms from law-abiding citizens -- will lead his gun control effort if he wins the White House this fall.

"I'm gonna guarantee you this is not the last you've seen of this guy," said Biden, with an arm around O'Rourke.

"You're going to take care of the gun problem with me. You're gonna to be the one who leads this effort," the former vice president told the former Texas lawmaker.

O'Rourke, while still in the White House race, responded to the murder of 22 people at a Walmart in his hometown of El Paso, Texas, last August with a vow.

When asked what he would do if gun owners refused to comply, he said police would seize the weapons.

He told MSNBC in an interview during the campaign that "just as in any law that is not followed or flagrantly abused, there have to be consequences or else there is no respect for the law."

"So you know, in that case I think there would be a visit by law enforcement to recover that firearm and to make sure that it is purchased, bought back so that it cannot be potentially used against somebody else," O'Rourke said.