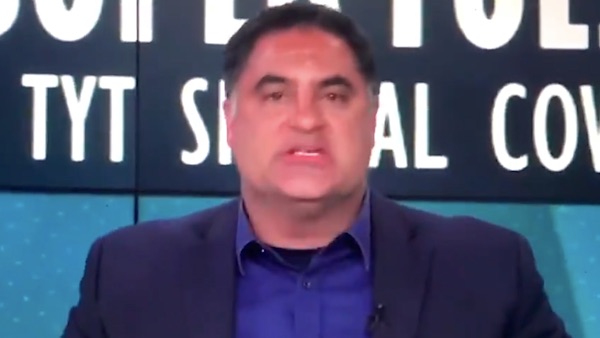 Uygur lamented during his show's coverage of the election results  that he and other far-left supporters of Sanders thought the Democratic presidential primary would be over on Super Tuesday. But now their candidate, the self-declared democratic socialist senator, is in a virtual tie with the former vice president.

"If you wanna go to war, we'll go to war," he said ... "We cannot let Biden win. This is not just progressives versus establishment. Guys, I need you to understand this: Biden is not gonna beat Trump.

"Biden is either near senile or actually senile," he shouted. "Watch any of the tapes."

The Cenk Meltdown is back! You love to see it. pic.twitter.com/zlHzzD4aP4

Uygur himself, the Daily Caller noted, was on a congressional ballot in California. He came in fourth with about 5% of the vote in an election to replace Democratic Rep. Katie Hill after she resigned in 2019 amid scandal.

He accused the establishment of lying about Sanders to knock him out of the race.

"Everyone on TV is lying," Uygur complained, "like, 'Oh my God, what an outrageous thing that Bernie Sanders said!' Obama said the same thing! 'No, don't cover it! Don't cover!'"

Ugyur said that along with Biden being "senile," he "lies nonstop."

"He's going to get caught!"

The progressive activist TV host noted the media "are covering" for Biden, "but they're not going to be able to cover for him when the Republicans come for him, when Trump comes for him."

"He's not going to beat Trump," he said.

In 2016, he argued, the establishment candidate, Hillary Clinton, lost to "a doofus like Trump."

"And you're going to run that guy against Trump and maybe lose our democracy?" he asked. "Hell no. Hell no."

Despite his fears, Uygur predicted Sanders would win the Democratic nomination.

"Biden is not capable of winning this, and we're not going to do any brokered convention where they give it to someone [who got fewer votes]," he declared.

"Bernie Sanders is going to be the nominee," Uygur said. "I'm telling you right now."