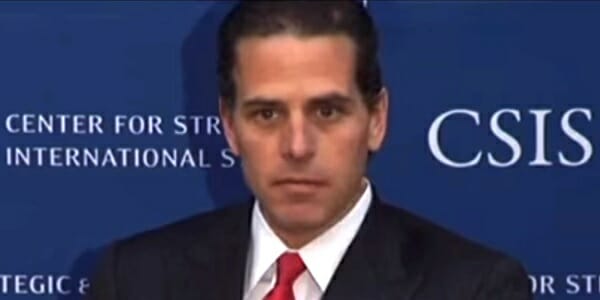 A Senate panel announced Wednesday it will release an interim report on its investigation into Hunter Biden's work for the Ukrainian energy firm Burisma Holdings.

The report, to be released within the next month or two, will focus on what former Vice President Joe Biden knew about his son's service on the board of the corrupt firm.

"These are questions that Joe Biden has not adequately answered,” said Sen. Ron Johnson, chairman of the Senate Homeland Security and Governmental Affairs Committee, reported Politico.

"And if I were a Democrat primary voter, I'd want these questions satisfactorily answered before I cast my final vote," the senator said.

With no experience in the energy industry, Hunter Biden became a Burisma director in April 2014, just as his father became Barack Obama's point man for Ukraine policy.

Johnson told reporters Wednesday the timing of his announcement had nothing to do with the Democratic primary.

Politico noted the renewed focus on Biden coincides with his surge to frontrunner status, which "has alarmed House Democrats as they brace for an all-out GOP assault on Biden and his son over an issue that was litigated at length during President Donald Trump's impeachment trial."

Joe Biden's public boast of threatening to withhold aid from Ukraine if its president didn't fire the nation's top prosecutor – who was probing Burisma at the time – was at the center of the impeachment charges.

In a July 25 phone call with Ukraine President Volodymyr Zelensky, Trump mentioned Biden's boast and asked that Ukraine assist Attorney General Bill Barr in an investigation of the matter.

The Daily Caller reported Monday a Senate committee is preparing to issue its first subpoena in the investigation.

Telizhenko already has provided relevant documents but cannot hand over others without a subpoena, because they are protected by a non-disclosure agreement, Johnson explained to Peters in a letter, which was first reported by CBS News.

Hunter Biden, after joining Burisma’s board, is believed to have linked up the energy company up with Blue Star Strategies.

"As part of the Committee’s ongoing investigation, it has received U.S. government records indicating that Blue Star sought to leverage Hunter Biden’s role as a board member of Burisma to gain access to, and potentially influence matters at, the State Department, Johnson wrote.

Blue Star co-founder Karen Tramontano reached out to top State Department officials to set up meetings to discuss Ukraine and Burisma, according to State Department records, the Daily Caller reported.

An official contacted by Tramontano said she wanted to meet to get "a better understanding of how the U.S. came to the determination that [Burisma] is corrupt."

Tramontano mentioned that Hunter Biden was affiliated with Burisma.

The Daily Caller noted that in recent months, Telizhenko has worked closely with Rudy Giuliani as he has pushed for further investigation of the Bidens and Burisma.