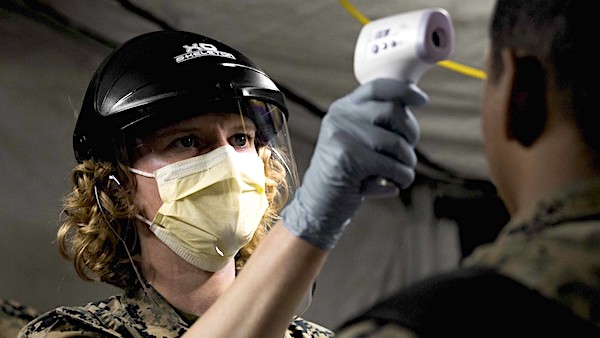 A prominent imam in Syracuse, New York, is warning that Allah could punish Muslims who live in the lands of infidels with the coronavirus.

Khadar bin Muhammad, the imam of the Bilal Ibn Rabah mosque, said that "when Allah decides to punish the infidels on their land, he may destroy anybody who is on that land," according to the Middle East Media Research Institute.

MEMRI said the imam warned that Allah may punish them by such means as COVID-19 for "just chilling" while they are surrounded by sins such as fornication, homosexuality and alcohol consumption.

The Islamic leader, MEMRI said, "also sharply criticized women who are lackadaisical and lazy when it comes to covering their ears, necks, wrists, and ankles, and he stood up to demonstrate that a dress that exposes a woman's ankles is too short. He explained that these are all parts of a woman's awra – private parts that women cannot show to men – and that showing these body parts is disgusting and impermissible."

"They are playing games [with Allah] like Jews," the imam said.

He said such punishment "comes and it goes and destroys everyone."

"So think about our situation here in America. How many of us are enjoining the good and forbidding the evil? Or are we just comfortable chilling – 'I'm here,'" he said.

"The punishment might come to us first, because we are relaxed and chilling in the lands of the infidels. Evil [is] all around us. People are committing fornication and drinking alcohol, [there are] gay people. ... All types of sins and stuff that's here. And what are we doing? We're just chilling."

He warned of polytheism.

The Atlantic reported a "surprising number of Iranian government officials" are succumbing to COVID-19 in Iran.

It was third behind China and South Korea and just ahead of Italy for the number of cases.

"But the official Iranian number is almost certainly an undercount, probably due to the Iranian government’s attempt to hide a desperate situation for which it is partially responsible. When the final history of the coronavirus epidemic of 2020 is written, it may go something like this: The disease started in China, but it became finally and irrevocably uncontained in Iran. Knowing that the Iranian number is much higher than currently disclosed tells the rest of the world that the epidemic is even further along than official statistics indicate," the report said.

"The first sign of dishonesty came on February 28, when Masoumeh Ebtekar, one of the country's vice presidents, announced that she had the virus. Ebtekar is one of the most famous politicians in the country, well known even in the West for her role as a particularly sadistic member of the group that held U.S. diplomats hostage in 1979 in Tehran," the report said.

Then, soon, "we learned of three other senior officials who not only contracted the virus but were killed by it: Mohammad Mirmohammadi, a member of a senior advisory council to Iran's supreme leader, and Hossein Sheikholeslam and Hadi Khosrowshahi, both former high-level diplomats."