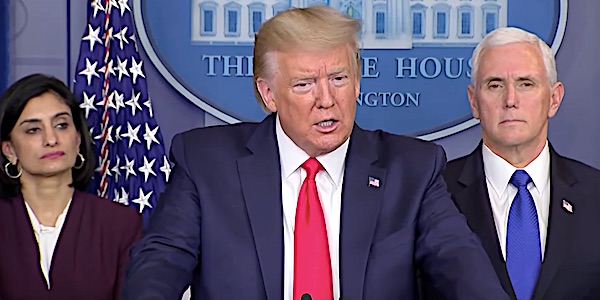 Amid the coronavirus pandemic, with thousands of people dead and tens of thousands more sick worldwide, a reporter's focus at a news conference with the president Wednesday was on whether a White House employee called the disease "Kung Flu."

Reporter Yamiche Alcindor asked President Trump whether he would condemn the term, then rephrased her question from one breath to the next, asking if it's proper to label it the "Chinese virus."

"At least one White House official use the term Kung Flu, referring to the fact that this virus started in China," Alcindor said. "Is that acceptable? Is it wrong? Are you worried that having this virus be talked about as a Chinese virus might – "

President Trump: "Do you know who said that?"

Alcindor: "I'm not sure of the person's name. But would you condemn that--?"

Alcindor: "A person at the White House used the term 'Kung Flu.'"

She then rephrased the question: "Do you think using the term 'Chinese Virus' puts Asian Americans at risk? That people might target them?"

"Not at all, I think they probably would agree with it 100%. It comes from China," the president said.

Another reporter demanded to know why the president called it the "Chinese virus."

He said it's because it comes from China.

It was Chinese officials who first described it as the Wuhan virus, after the Chinese city were it orginated. Now they're claiming it may have have been delivered to Wuhan by U.S. soldiers.

CBS reporter Weijia Jiang claimed in a tweet that an unnamed White House official had called the deadly virus the "Kung Flu" to her face, Fox News reported.

"This morning a White House official referred to #Coronavirus as the 'Kung-Flu' to my face. Makes me wonder what they're calling it behind my back," she tweeted.

Earlier Wednesday, White House adviser Kellyanne Conway said the phrase 'Kung Flu' was wrong but refused to engage in a "hypothetical," demanding to know who in the White House had the exchange with Jiang.