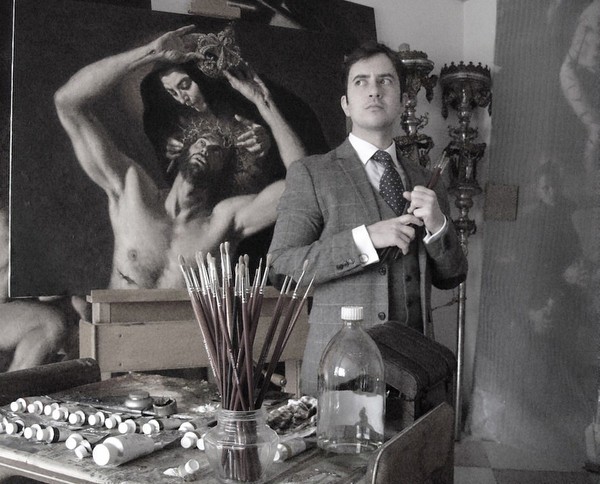 Giovanni Gasparro appears to be a man of great gifts and equal amounts of unwarranted hatred. The young Italian painter recently unveiled a stunningly anti-Semitic diptych, with no comments or apology.

Its title, "The Martyrdom of St. Simon of Trento in Accordance with Jewish Ritual Murder," speaks clearly enough. The 7 foot by 5 foot painting reenacts an appalling 15th century accusation against Jews, which has apparently been raised from the dead. A tiny light-skinned boy is surrounded by leering and crazed stereotypical Jews, replete with yarmulkes, prayer shawls and clothing representing Jews across the centuries. Cheering men lunge toward the boy with something like bloody icepicks, a horrific scene.

Variations of blood libels charge that Jews kidnap and eat gentile children, like the Big Bad Wolf. Tragically, they were sometimes believed. In 1475, all the Jews in Trento, Italy, were arrested and 15 killed because a 2-year-old boy wandered from home and didn't come back. Simon was his name, and he was later canonized as a martyr. After investigation in 1965, the Catholic Church denounced this as a fabrication and removed little Simon from the roll of saints.

Ratcheting up centuries of Jewish-Christian tensions, Gasparro's symbolism clearly makes the child a type of Christ – adding yet another blood libel (the greatest of all), that Jews alone are to be blamed for killing Jesus. In "The Martyrdom of St. Simon," the child is cut on his side, and his arms wrenched apart as if he were being drawn and quartered. It's monstrous because it's such a lie.

Many forms of art are "lies" (fantasies, abstractions), but the intention is to lead on to larger truths. At least this is one definition of art. Gasparro's painting fails so epically because it's not only a lie, but it leads to no other conclusion than the lie we so plainly see. Even the title repeats millennia of blood libel. Florid details appear intentional including Jewish hairstyles, exaggerated racial characteristics (hooked nose, taloned fingers), and general ugliness of manner and mien. 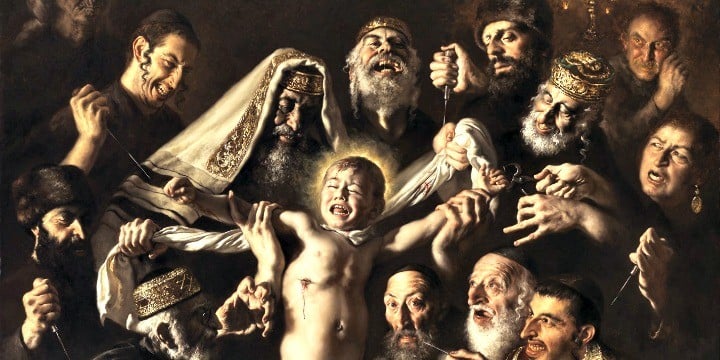 "The Martyrdom of St. Simon of Trento in Accordance with Jewish Ritual Murder" a re-enactment of a 15th C. blood libel against the Jews. By Giovanni Gasparro, Italy. 2019-20. 5x7ft. Source: Facebook

Unfortunately, Gasparro's technique isn't at all ugly. It's exquisite, and so much like Renaissance masters that some writers questioned if the painting was his or just a post of something old and easily explained. Not so. I've looked over his work, and all of it is as beautifully crafted as "The Martyrdom of St. Simon." That makes this harder to accept and somewhat of a mystery.

Does Gasparro really believe this? Apparently, the painting is in a private collection already, and it may have been a commission. If so, he may have been assigned the subject, and artists have a tough time making it financially. But to put it on your Facebook page and tell the whole world – why?

Gasparro is an uncommonly gifted painter with many shows, sales and work for the church in Italy. He was in the prestigious 2011 Venice Biennale, and his commissions and awards are varied and impressive. Most of Gasparro's paintings have religious themes, and his Facebook icon shows a man holding a baby to be baptized. The painter apparently takes his own baptism seriously, because he mentions the date (Dec. 18, 1983) in his biography for Galleria Russo.

Both Jewish and Catholic communities have reacted to "The Martyrdom of St. Simon" with outrage and are pushing Pope Francis to publicly condemn it. Why Gasparro is turning his pearls into swine is beyond me, and I hope a statement clears things up. The worst explanation would be that he believes the blood libels are all true, that he has never bothered to know a Jew, to attend a Passover, or to do a little research. But it gets even weirder.

In 2013 the painter won the Bioethics Art Competition by UNESCO's Bioethics and Human Rights Chair, citing the Casti Connubii as his inspiration. This was a 1930 encyclical issued by Pope Pius XI, which upheld the "sanctity of marriage, prohibited Catholics from using any form of artificial birth control, and reaffirmed the prohibition on abortion." From the surface, Gasparro appears to be one of us – a conservative, pro-life believer. Which I find rather terrifying.

Gasparro's gallery claims his patrons include the "Presidency of the Italian Republic, Senate of the Republic, Chamber of Deputies and numerous Ministries, as well as regional, provincial and municipal institutions." If this is true, their reactions to his recent painting will tell us as much about Italy as it does about the painter.