Democratic 2020 candidate Sen. Bernie Sanders has hired Phillip Agnew as a campaign adviser, promoting an individual who supports the abolishment of prisons and has a history of making inflammatory comments.

The Sanders campaign announced on Saturday that Agnew — who was already serving as a top campaign surrogate — has been hired on as a senior adviser. Agnew notably works as a co-director for Dream Defenders, a far-left group that advocates for the abolishment of prisons and police, the end of capitalism, and supports open borders.

“I am excited to welcome Phillip to our team,” Sanders said in a Saturday press release. “He is a gifted organizer and one of his generation’s most critical voices on issues of race and inequity.”

“He has and will continue to push me and this movement to deliver on what is owed to Black people who have yet to experience reciprocity in this country,” Sanders continued.

Formed in the aftermath of the shooting of Trayvon Martin, Dream Defenders advocates for a number of far-left proposals, particularly pertaining to issues that affect people of color.

The “Freedom Papers,” a manifesto published by the group, claims that police and prisons have no place in “justice.” The manifesto also denounced the country’s capitalist system, and claimed it was responsible for major wealth gaps. Dream Defenders has also advocated for open borders. “Can you imagine a border-free tomorrow? This is freedom of movement,” the group tweeted in June 2018.

A Daily Caller News Foundation investigation discovered that Dream Defenders not only supports the anti-Israel boycott, divest, and sanction (BDS) movement, but it has also repeatedly promoted the Popular Front for the Liberation of Palestine, which has been a U.S.-designated terrorist organization since 1997.

Agnew has made inflammatory statements about 9/11 in the past and has blamed “U.S. interventionist policy” for the terrorist attacks.

“Tomorrow America remembers the day that she turned on herself, dismantled her constitution, and killed her own citizens in the name of money,” Agnew tweeted on Sep. 10, 2010, a day before the 9/11 anniversary. 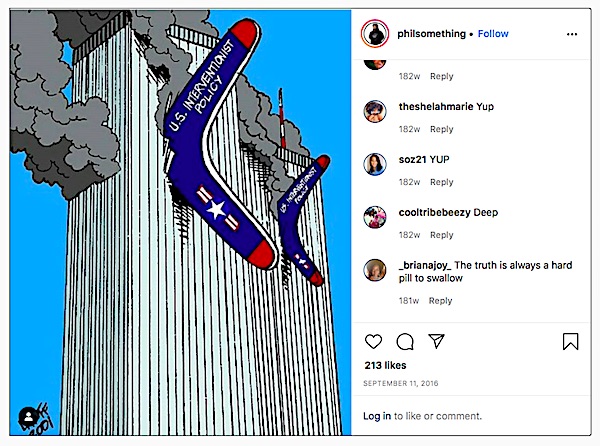 The Sanders campaign did not immediately respond to a request for comment by the DCNF.