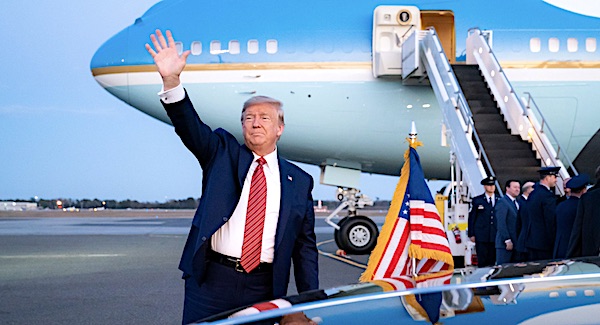 Talk-radio host Rush Limbaugh on Monday was asked about a Congress member's charge that President Trump must not care about his supporters, because he keeps holding rallies amid the coronavirus outbreak.

Limbaugh told his listeners it's not surprising that Democrats are anxious to find some way to shut down Trump's rallies, which fill arenas across the nation with enthusiastic crowds, which include Democrats.

"It makes perfect sense from their standpoint. If you can’t beat Trump and if you want to stop the appearance of excitement about the Trump campaign, then stop the rallies — and if you’re really worried about that so many people attending rallies are actually Democrats, then you’ve really gotta shut ’em down," he said.

A listener asked: "My question is, do they really think that everybody is that stupid? Because they haven't suggested canceling their primaries or their debates or their early voting where all the voting machines, I’m sure, are germ-infested. Now, granted, not as many people show up to their rallies so the risk might not be as high. But I’m just wondering what your thoughts are on that."

Limbaugh replied: "Why they're hyping this is to get Trump to stop the rallies. But let me tell why it is. Let me tell you why it is."

Limbaugh noted Rahm Emanuel, who served as chief of staff for Barack Obama, said shutting down the rallies would be "devastating for Donald Trump."

Limbaugh commented: "They don’t get this at all. You know, folks, I sit here literally — I have now for four years — in stunned amazement over the inability of the Democrats to understand these rallies. And this comment from Rahm Emanuel informs me of just how ignorant about this they are, and it’s worse than I thought.

"These are political professionals whose job it is to try to figure out why their opponents are beating them and to figure out ways to stop that and to beat their opponents, and these people — folks, it’s stunning how far off the mark they remain when it comes to understanding Donald Trump and you, his supporters. They still can’t figure it out."