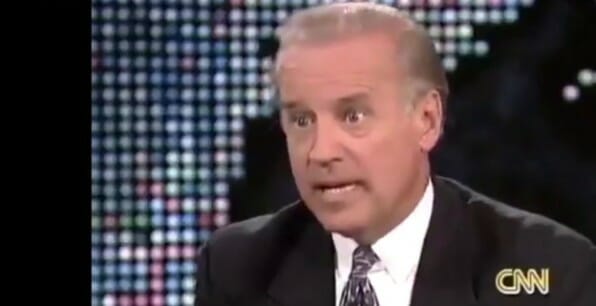 Joe Biden in an 1998 interview with CNN (screenshot)

Perhaps even a gaffe would have been better than this.

Democratic presidential hopeful Joe Biden was confronted Tuesday in Oakland, California, by two anti-war veterans who criticized his support for the war in Iraq.

Biden's response was to invoke his late son Beau, who was deployed to Iraq as a member of the Delaware Army National Guard, then walk away from the argument.

“Millions are dead in Iraq. We actually fought in your damn wars. You sent us to hurt civilians.”

Two veterans confronted Joe Biden for supporting the #Iraq invasion - a war that was launched on a pack of lies - a war that killed over a million civilians. pic.twitter.com/8pVqwPXQ1Q

Biden's other son, Hunter, joined the Navy in 2014 but was discharged after testing positive for drugs.

"I'm an Air Force veteran. I'm here with an Army veteran," one vet said. "We are just wondering why we should vote for someone who voted for a war and enabled a war, that killed thousands of our brothers and sisters, countless Iraqi civilians."

Biden responded that his son was in Iraq for a year.

The veteran said he's not "going after" Biden's son, and Biden replied, "You better not."

Biden then turned his back on the veteran and moved away.

His weakness as a campaigner was spotlighted last month by Foreign Policy, which observed "most signs are that Biden's experience, and his often halting efforts to explain it on the stump, may well have been working against him, if his devastating fifth-place finish in New Hampshire's primary ... with just 8.4 percent of the vote, is any indication."

Many of his "difficulties on the campaign trail," the report said, are "self-inflicted."

"At 77, he has proved uneven at best as a campaigner, with more foot-in-mouth episodes than any other candidate—most recently when he bizarrely called a young woman in New Hampshire a 'lying, dog-faced pony soldier' after she asked him about his poor performance in Iowa. And Trump may have succeeded somewhat in his goal of fatally smearing Biden—a campaign that ultimately led to the president’s impeachment—by highlighting Biden’s activities in Ukraine while he was vice president as well as those of Biden’s son Hunter. Even Biden staffers admitted that Hunter had created a serious conflict-of-interest issue for his father by taking a well-compensated job with a Ukrainian energy company," the report said.

The veterans were challenging Biden's vote to authorize the Iraq War in 2002.

"On the stump and at the Democratic debates, Biden has tried mightily to explain the nuances of his position: that the George W. Bush administration lied to him about its invasion plans and that he had pressed unsuccessfully for a resolution that would have required the president to delay the use of force until the United Nations approved a new resolution," the Foreign Policy said.

"But such messages don’t seem to resonate well."