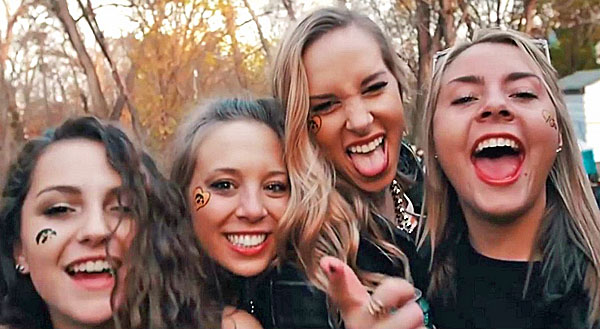 College officials are trumpeting their new core mission of protecting female students from male student sexual aggressors. But academe is strangely silent in the face of professors or administrators themselves allegedly crossing the line by leering, making lewd comments, groping students or worse.

Buried within an influential campus sexual assault survey last year by the Association of American Universities is evidence of hundreds of incidents of inappropriate and potentially criminal behavior by faculty and staff against female students.

“The information buried in the report raises more questions than it answers and requires further investigation and explanation,” said Subodh Chandra, a Cleveland, Ohio, attorney who represents college plaintiffs in sexual misconduct lawsuits.

The anonymously conducted survey at 33 elite schools, ranging from Harvard to Ohio State, generated widespread news coverage by reaffirming a controversial statistic -- that one in four college women will be assaulted or raped before they graduate.

The survey’s results concerning a more obvious power mismatch -- faculty and staff sexual misbehavior toward female students -- were not highlighted. Instead, the information was presented in tables, in a form difficult to decipher by students, parents and others. For example, the survey does not list the number of incidents, but provides the data as percentages – such as 0.3% or 0.5% – weighted for methodological reasons.

RealClearInvestigations contacted many of the schools in the survey to find out how they interpreted the AAU percentages and how they’re responding. Most did not respond or declined comment. The few that did said they did not know how to decode the data to determine the number of incidents or allegations.

AAU spokeswoman Jillian Gates said it would be inappropriate to provide the actual numbers of incidents from the survey. Instead, she suggested RCI find independent survey experts to interpret the data.

One such expert is William Kidder, a University of California Santa Cruz administrator who previously has overseen education anti-discrimination offices established under Title IX. Kidder is also co-author of a 2018 study in the Utah Law Review entitled “A Systematic Look at a Serial Problem: Sexual Harassment of Students by University Faculty.”

Kidder also calculated the numbers for other job classifications – researcher, administrator, other staff – resulting in what appear to be several hundred misconduct incidents at the 33 universities. The number of actual victims at the 33 participating institutions is almost certainly higher because only 26.1% of women responded to the surveys. And that’s not taking into account the thousands of potential misdeeds by faculty and staff against students at all the nation’s 4,000-plus colleges and universities.

“It’s an under-appreciated issue that warrants its own attention,” Kidder said. “It’s more likely to have greater harmful effects on the student victim because of the abuse by someone in power.”

The incidents in question – non-consensual touching and non-consensual penetration involving physical force or inability to consent – correspond to the legal definition of sexual assault or rape in many jurisdictions.

The AAU’s 433-page Campus Climate Survey on Sexual Assault and Misconduct is the largest of its kind, with responses from 181,752 students last year, including 110,812 women. (Men also reported sexual misconduct by professors and university staff, but at much lower rates.)

The survey’s data concerning faculty do not shed any light on whether the incidents involved a tenured professor preying on unsuspecting undergrads; or whether they include a he-said/she-said between two fourth-year medical students who also happened to be graduate school instructors. Some of the non-consensual touching and penetration may have taken place during the same episode of misconduct, and so may not represent separate incidents. The employee could potentially be a serial offender still lurking on campus, but it’s also possible some of the incidents were reviewed by a Title IX officer and dropped for lack of evidence.

“We do not know the details behind any incidents or responses and have no way of knowing whether the respondent reported an incident to our Equal Opportunity and Compliance Office,” said Jeni Cook, spokeswoman for the University of North Carolina in Chapel Hill, said by email. “We can’t speak to the data beyond what’s in the report as many of the responses were ‘suppressed for confidentiality reasons.’ ”

The AAU report appears to confirm what other studies have shown about faculty harassment and misconduct, said Kathryn Holland, a University of Nebraska-Lincoln professor in psychology and womens’ and gender studies. Though much remains unclear, because of such concerns as confidentiality, due process, legal exposure and institutional reputation, what is clear is that in the past it has been difficult to sanction tenured professors who enjoy special procedural safeguards against discipline and dismissal, advocates and researchers say.

Victims’ advocates say power disparities can make it nearly impossible for underlings to truly grant consent to professor or university employee in the areas of sex and romance, and that can embolden faculty and other authority figures to take advantage of their younger charges. Many universities bar professors from sexual or amorous relationships with their own students, but a number of institutions are now moving to ban all faculty-undergraduate sexual contact on the theory that such relationships create a hostile educational environment for all students.

Efforts are percolating on some campuses to challenge an academic culture that has long been indifferent to student/faculty relationships.

Last year, for example, angry students stormed a philosophy professor’s class at the University of Texas in Austin after they learned he had been disciplined for sexual misconduct, including allegations that he invited students to go skinny-dipping and pose nude in photos, and was back in the classroom teaching undergrads.

UT students also staged sit-ins to protest the reinstatement of a pair of professors to teaching duties after they were disciplined for sexual wrongdoing against students, including allegations of an English professor failing to report a consensual relationship with a grad student. The university has responded by forming a sexual misconduct tax force and hiring an outside law firm to review its procedures and to look for ways to address protestors’ concerns.

Also last year, Dartmouth agreed to pay $14 million to settle a lawsuit filed by nine current and former students alleging that three professors in the Department of Psychology and Brain Sciences had groped, assaulted and raped female students over a course of years.

The University of Illinois, an AAU member that did not participate in the sexual assault survey, has been in the spotlight, especially since a ProPublica and NPR Illinois investigation reported last year on the school’s lackluster response to a spate of faculty harassment that included showing up at students’ homes, inappropriate touching, unwelcome sexual comments and other unwanted attention.

The University of Illinois is among the systems weighing a prohibition against consensual sexual relations between faculty and all undergraduates, and graduate students they are supervising. It is also considering requiring all job applicant finalists to agree to the release of any findings of sexual misconduct or harassment against them from current or previous employers.

Given such interest in this topic, some say, it’s all the more surprising that AAU didn’t draw attention to its findings, including the estimated 33 women who reported nonconsensual penetration by faculty or instructor.

“The 33 people who said ‘yes’ – they exist,” said KC Johnson, a history professor at Brooklyn College and at the CUNY Graduate Center who co-authored the 2017 investigative book, “The Campus Rape Frenzy: The Attack on Due Process at America’s Universities,” which looked at abuses against accused males during Title IX sexual misconduct cases.

The information “has value, and it suggests the AAU wasn’t particularly interested in finding out the specifics of it,” Johnson said. “In theory, this is information that universities would want most because it involves their employees. Instead, the report handles it in such a vague fashion so that it’s very difficult to get a sense of what precisely happened to them.”

AAU’s 2019 report is the organization’s second campus sexual climate survey, following the initial study in 2015. Critics like KC Johnson say AAU inflates assault statistics by including casual physical contact, such as touching someone through their clothes on a dance floor without getting verbal consent. Johnson and others have said the survey is unscientific because it likely disproportionately attracts students who have experienced sexual misconduct, and almost certainly overrepresents the number of students who experience these problems on campus.

Jennifer Freyd, a University of Oregon psychology professor and victims’ advocate, said she did not know why the faculty/staff misconduct data was not highlighted.

“You always have to interpret it in light of what that organization exists to do,” Freyd said. “The AAU is fundamentally a lobby organization for a set of elite institutions in the USA – it largely exists to protect their interest.”

AAU members span Harvard and Yale in the Ivy League, premier destinations such as MIT and Stanford, as well as flagship state schools including Iowa State, Ohio State and the University of Florida.

“While the survey tells us that the vast majority of sexual misconduct happening on campus is student-on-student, all allegations of sexual misconduct – including those against faculty or staff members – are promptly investigated and addressed,” said an email from the media relations office Georgetown University, the lone non-AAU member that participated in the survey.

Detailed information on campus sexual misconduct is notoriously difficult to come by, KC Johnson said. It’s not clear how many Title IX sexual misconduct complaints are filed nationwide, how they are resolved, and the relationship of the parties involved.

Yale University, for example, files a semi-annual report in the spring and fall with brief incident descriptions. Last year Yale reported a record 169 complaints lodged in the first six months of the year with Title IX coordinators, the Yale Police Department or the University-Wide Committee on Sexual Misconduct. The number of complaints has been rising steadily and is now quadruple the totals seen in 2011.

These reports document complaints by students against other students, faculty and staff, as well as staff-against-staff, faculty-against-faculty complaints, and, one case in which a faculty member complained that an undergraduate student engaged in “inappropriate comments of a personal nature.”

Those cases resulted in terminations, resignations, suspensions, special accommodations, counseling, no-contact agreements and other measures; other complaints couldn’t be substantiated.

William Beaver, a sociology professor at Robert Morris University, said the awareness of the perils of faculty sexual interest in students is a relatively recent development on campus.

“I can tell you that I have known people, males in this case, that saw it as a candy store, said Beaver, author of a 2017 study, "Campus sexual assault: What we know and what we don't."

“But that has been curtailed a bit in the last few years.”

WND News Services
These reports are produced by another news agency, and the editors of WND believe you'll find it of interest.
3 members of Congress sue Pelosi over mask fines
S&P 500 falls from a record ahead of big earnings, snaps 5-day win streak
Shark bites man's butt 1 week after a man was killed by a shark at same beach
Charles Barkley: 'The only people who are not vaccinated are just a**holes'
'Critical condition': Billy Graham's grandson hospitalized with COVID
See more...

Officers detail how 'terrorists' attacked them at U.S. Capitol