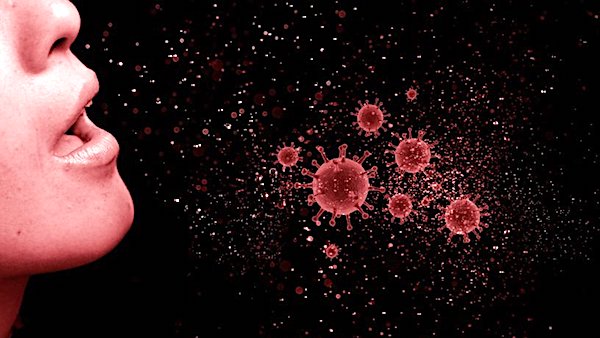 China is waging a propaganda war against the coronavirus on several fronts. In addition to its well-documented efforts to deflect attention from its early suppression of information about the disease and to claim that it has among all nations now halted the scourge, it is also pushing an alternative explanation of its origins—namely that it didn't start in Wuhan after all, but was a creation of a military biochemical lab in the United States and was brought to China by an American team that competed in the Military World Games in Wuhan last October.

While that conspiracy theory was quickly noted and dismissed in much of the West, it is continuing and broadening all over social media in China – a country that strictly monitors what appears on its online platforms, regularly scrubbing it of what the authorities call “rumors.” But a lot of it, put on platforms that are banned in China, seems aimed outward, part of a concerted effort to convince the world that China, once the villain of the coronavirus story, is actually its hero, and that the real villain is America.

Its effectiveness may provide a new illustration of how fake news, if repeated loudly and often enough, uses social media as a carrier to spread misinformation around the globe.

Recently, for example, Global Times, an English-language mouthpiece of the Chinese Communist Party, called on the American government to release the medical records of all the members of the American team that competed in Wuhan, so as “to end the conjecture about U.S. military personnel bringing Covid-19 to China.” In asking the United States to be “transparent,” the paper was giving credence to a claim at the heart of the conspiracy theory, that a 50-year-old bicycle racer named Maatje Benassi, a member of the American delegation, was “patient zero,” the first victim of the disease, which would mean that the virus was brought to China by the United States. This claim has been amplified across Twitter.

Among the ironies in this is that the demand for transparency is coming from China, one of the most secretive and opaque regimes in history. Another is that the idea that Benassi is “patient zero” stems from an American conspiracy theorist named George Webb. In a Youtube video earlier this month, Webb advanced that notion, along with the theory that the virus was created, not in China, but at Fort Detrick in Maryland.

It's not the first time that China has given quasi-official sanction to the rewriting of the recent coronavirus past. The theory that the American army created the coronavirus has been propagated on Twitter, for example, by Zhao Lijian, a spokesman for China's foreign ministry. What's become clearer over time is the possible goal of China's effort: to win respectful treatment for its evidence-free claim, to present the question of the virus's origins as undecided, something urgently requiring further research and disclosure.

Chinese websites are carrying numerous videos detailing what one of those sites, dubbed Sharp Arrow Military News, calls “America's ugly truth.” Slickly produced and professionally narrated, the videos list various supposedly incriminating facts about American behavior and spin them into a tale of a dark anti-China plot -- for example, that as late as February President Trump seemed unconcerned about the spread of the virus to the United States.

One video making the rounds recently provides one of the more elaborate presentations of the theory to date. It's not entirely clear who created it, or how broadly it is circulating in China or how great its influence is. A brief, unscientific survey of people inside China, mostly well-educated middle-class city dwellers, turned up nobody who actually believed its claims.

But the video is professionally done, with a Chinese-language narrator speaking with very much the style and intonation of official Chinese news broadcasts. It has the look and format of other videos that have been put out by a Chinese army propaganda unit in Wuhan, though it could not be confirmed whether this new video was produced in this way or not.

“We have to find patient zero, the first coronavirus case,” the narrator says at the beginning of what appears to be a piece of investigative journalism, a supposedly sincere and objective effort at sifting through the facts to arrive at “the truth” of the virus's origins. “At the beginning, everybody thought it came from a seafood market in Wuhan, but now it appears maybe not,” the narrator says, going on to advance the theory that the video will explore: “Maybe it's related to the Wuhan military competition.”

In support of that notion, the narrator - according to RealClearInvestigations’ translation – reminds viewers that the 2019 World Military Games were held in Wuhan in October last year, with participation by some 10,000 athletes from more than 100 countries, including the American team with nearly 300 athletes and staff. The U.S., which, the narrator says, “has very strong abilities,” did poorly in the competition, and indeed, the American team won just eight medals, none of them gold, compared to China's 239.

Isn't this a strange thing? the narrator goes on to say, putting the poor American performance into a sinister light and using it to support the theory that the coronavirus must have originated in the U.S., not in China.

“Do you think the Americans came to Wuhan to buy soy sauce?” the narrator asks sarcastically. “They didn't come to compete; they came because they had a job to do,” and while he doesn't say so explicitly, the implication is clear: the “job” was to plant the new virus in Wuhan, thereby framing China as the creator of the new disease.

And from there, the video moves to other suspicious “facts” about the epidemic, among them: that some Japanese who had never been to China came down with the virus after vacationing in Hawaii; that more strains of the virus have been detected in the U.S. than in China; that Fort Detrick was mysteriously closed by the Centers for Disease Control last July.

The narrator also repeats some by now discredited claims, notably that Robert Redfield, the head of the CDC, admitted at a press conference that some Americans believed to have died of the flu last fall actually died of Covid-19. Redfield admitted this “very firmly,” the narrator says, thereby, he contends, providing irrefutable confirmation of the theory that the virus was in the U.S. before it was in China.

What Redfield actually said during congressional testimony in March, well after the virus had begun to spread in the U.S., was that it is possible that some people whose deaths were believed to have been caused by the flu might actually have been victims of the coronavirus but weren't tested for it. He did not say that people died of Covid-19 last fall, before the disease appeared in China.

The Chinese video then goes on to answer its question regarding the identity of patient zero: It was Maatje Benassi, the army bicycle racer.

“The circle is complete,” the narrator says, and then addresses President Trump: “What is your response?”

The outward circulation of the Chinese claims on platforms like Twitter and YouTube (whcih are banned in China), could be in part a simple matter of national pride, a concern for the country's international image, and a response to President Trump's use of the term “Chinese virus” to refer to the disease, which has infuriated many Chinese. But some commentators point out that China's withholding of information was a breach of international law that could make it legally liable.

China's failure to provide timely information about the virus and its level of contagion to the World Health Organization, for example, “is more than a moral breakdown,” James Kraska, a professor of international maritime law at the Naval War College, wrote recently. “It is also a breach of a legal duty that China owed to other states under international law, and for which injured states – now numbering some 150 – may seek a legal remedy.”

To be sure, conspiracy theories are legion around the world, whether it's the claim that the 9/11 attacks were a CIA plot to give President Bush an excuse to invade Iraq, or whether it's the notion, reiterated by Tom Cotton, the Republican senator from Arkansas, that the virus originated in a high-tech biochemical lab in Wuhan itself.

The difference with China is that misinformation there has been used as an element of state policy, sometimes officially, sometimes more informally, but in either case without any possibility that a free press or an independent judicial machinery will challenge the official “truth.”

Perhaps the most blatant and well-known example of this in China was the country's denial that its military massacred civilian demonstrators when it brought an end to the massive pro-democracy protests in Beijing in 1989. Almost immediately after the army moved in to crush the protest movement, killing hundreds of people in full view of thousands of eyewitnesses, Chinese television was saying that the only people killed that night were brave army soldiers attacked by “hooligans.”

The disinformation effort on the coronavirus hasn't reached that point; it isn't a massive propaganda campaign inundating the media. Indeed, some efforts to propagate the idea of American responsibility for the virus have fallen flat. Earlier this month, for example, a blogger in China's Guizhou Province posted a video of a Caucasian man slyly putting spittle on a subway pole. "This is a solid proof showing that Americans were spreading the virus during the Military World Games,” the blogger wrote, asserting that the man in the video was a member of the U.S. Army team and was riding the subway in Wuhan.

In fact, the video showed a man riding a subway, not in Wuhan at all, but in Brussels, Belgium, where he was arrested and the subway car disinfected. When other social media users in China pointed that out, the blogger retracted his claim, though not before his original post had been viewed by an undetermined number of people.

But the idea that Maatje Benassi was patient zero and that there is now a “debate” between China and the United States over the origins of the virus has spread around the world, as a Google search of Benassi's name shows. China's demand for the U.S. to be “transparent” by releasing the military team's medical records has appeared on everything from websites about international cycling to 24-hour news sites across the globe.

Meanwhile, there has been no retraction of the lengthy video “investigation” of the coronavirus's origins with its claim that it was insinuated into China by the American military. While some Chinese officials are giving credence to that claim, the government has not officially endorsed it. It seems content to put it out there, to spread an idea that might shift discussion about the virus from China's responsibility to the question: Did it actually originate in America?