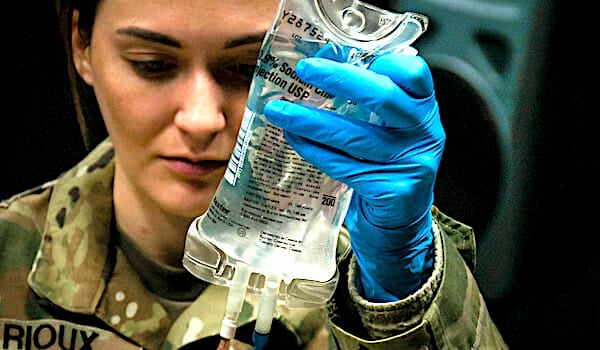 Islamic clerics in Iran have backed off their claim that the coronavirus is a judgment of Allah, but ISIS is calling it a "torment sent by Allah on whomsoever He wills" in its latest newsletter.

ISIS also is advising jihadists to steer clear of Europe to avoid contracting the virus, reported the International Project on Terrorism, or IPT.

Nevertheless, the newsletter declared, "Illnesses do not strike by themselves but by the command and decree of God."

IPT noted the tenor of comments by Iranian clerics about the virus changed after the outbreak spread in the Islamic nation, causing the deaths of numerous senior Islamic clerics and high-ranking government officials.

Now, Islamic Revolutionary Guards Corps Major General Hossein Salami is suggesting the coronavirus is a biological weapon developed by the United States against China and Iran.

When the virus initially was reported in China, Salafist Islamic clerics in Egypt, Morocco and elsewhere dubbed it a "Soldier of Allah" targeting infidels.

Abdul Razzak al-Mahdi, a Syrian Salafist tweeted on Jan. 20: "Allah gave them a soldier (virus). And many of God's soldiers said, Glory be to Him. ... O Allah, increase their suffering and affliction until they stop fighting your religion and worshipers."

An Egyptian cleric said China "launched a war against our Muslim Uyghur brothers and Allah sent his soldier [coronavirus]."

IPT reported the Algerian news outlet Al Masdar published a conspiracy theory under the headline "A Zionist organization is behind the Coronavirus and the Zionist entity (Israel) claims to have found the vaccine."

Iranian Mullah Nasser Makarem Shirazi declared Muslims must not take any Israeli medication for the virus unless there is no alternative.