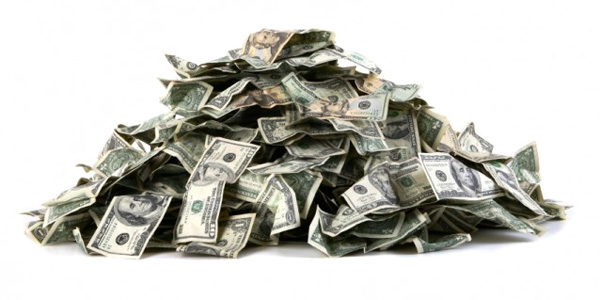 There were no charges or allegations, let alone any suspicion of wrongdoing.

But somehow $82,373 in cash that a family was taking to a bank in a nearby state via an airliner ended up in the hands of Drug Enforcement Administration agents.

Now, however, the agency is returning the money to Terry Rolin, according to the Institute for Justice. It was his life savings.

He had used boxes and jars to accumulate the cash over many years. A few months ago, his daughter, Rebecca Brown, persuaded him to turn it over to her so she could pay his bills and put the rest in a bank.

However, because of banks being closed and other considerations, she intended to carry the cash with her on a flight from Pittsburgh to Boston.

The DEA confiscated the cash at the airport.

Now, IJ says the DEA has announced that, after a review, it has decided to return the property.

IJ explained: "In January, Terry and Rebecca teamed up with IJ to file a lawsuit against the DEA and the Transportation Security Administration (TSA) seeking return of the money and an end to the agencies' unconstitutional and unlawful practice of seizing cash from air travelers without probable cause. Because Terry and Rebecca's suit includes class action claims and an individual claim for damages against the DEA agent who wrongly seized the money, it will continue to be litigated in federal court."

Brown said, in a statement from IJ: "I'm grateful that my father's life savings will soon be returned, but the money never should have been taken in the first place. I can't believe they're not even offering an apology for the stress and pain they caused for my family. Without this money, my father was forced to put off necessary dental work—causing him serious pain for several months—and could not make critical repairs to his truck. The government shouldn't be able to take money for no reason, hang on to it for months and then give it back like nothing happened, which is why the lawsuit we filed will continue. No one should be forced to go through this nightmare."

IJ explained that flying with cash is legal, but the TSA "routinely seizes luggage that contains 'large' amounts."

Agents take the money, without filing any charges, and then "property owners then find themselves in the upside-down world of civil forfeiture where they are not entitled to legal representation and the standard of proof needed for the government to keep the property is lower than in a criminal case."

"We are glad that Terry will get his money back, but it is shameful that it takes a lawsuit and an international outcry for the federal government to do the right thing," said IJ Senior Attorney Dan Alban. "We know that this routinely happens to other travelers at airports across the United States. Terry and Rebecca are going to fight on until TSA and DEA end their unconstitutional and unlawful practices of seizing cash from air travelers without probable cause or reasonable suspicion."

IJ explained it's the third time it's handled such a case. In Houston, it sued regarding $41,000 taken from a nurse traveling to Nigeria to open a medical clinic. In Cleveland, it sued after Customs and Border Protection seized $58,000 from a man planning to purchase a home for retirement.

Both cases ended with the money being returned.

"Terry, 79, is a retired railroad engineer born and raised in Pittsburgh. For many years, he followed his parents' habit of hiding money in the basement of their home. When Terry moved out of his family home and into a smaller apartment, he became uncomfortable with keeping a large amount of cash. Last summer, when his daughter Rebecca was home for a family event, Terry asked her to take the money and open a new joint bank account that he could use to pay for dental work and to fix his truck, among other needs," the institute said.

The agents took the money from her at the airport.