A recent survivor of an extremely rare cancer with a "100% mortality rate" that took one of his lungs, Dr. Vladimir Zelenko says he shouldn't be alive.

But now, a simple cocktail of three cheap, proven, widely available drugs his medical team has used to successfully treat at least 500 patients with the coronavirus is offering hope as the pandemic grows exponentially in his area of greater New York City.

The treatment now has the attention of the White House and Israel's Ministry of Health, among others, Zelenko told WND in a phone interview Wednesday morning.

"I was actually wondering why God spared me," said Zelenko, who noted he hasn't slept in the past four days.

It's an out-patient treatment combining the common anti-malarial drug hydroxychloroquine with the popular antibotic azithromycin (known as Z-Pak) and zinc sulfate. 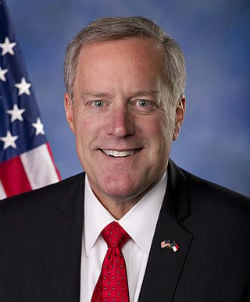 Zelenko, 46, told WND he is in direct communication with Mark Meadows, the North Carolina congressman who has been tapped by President Trump to become the next White House chief of staff.

"I don't know if the president saw [the protocols], but they were presented to whoever they needed to be presented to," he said.

"I know for a fact that my protocols are now at the Ministry of Health in Israel and that the government is considering adopting them."

On Tuesday, Vice President Mike Pence announced that the FDA has approved the use of hydroxychloroquine experimentally for any coronavirus patient while clinical trials commence.

In a video widely distributed Tuesday on social media, Zelenko said he treated 350 patients for COVID-19 with 100% success. Since then, among an even higher sample, one person he treated has been hospitalized, he told WND.

"I'm not claiming any miracles here," Zelenko said. "All I did was take established remedies and modify the dosage slightly, based on data from studies in France and the Far East."

'We need to treat the world'

A once-irreligious Jew from Russia, Zelenko is now an observant member of the 30,000-strong Hasidic community of Kiryas Joel in Monroe, New York, in the Hudson Valley, about 50 miles north of New York City.

Zelenko is taking his coronavirus treatment himself as a prophylatic as he directs his medical team from quarantine at home because of his lung loss and ongoing oral cancer treatment.

But their target is any patient with shortness of breath or other symptoms that put them in the high-risk category in which the mortality rate is 6% to 10%.

The key, he said, is when to use the treatment.

"It's the combination of these three drugs given earlier rather than later seems to make a significant difference," he said.

Zelenko explained that there are two different diseases, the COVID-19 infection and the catastrophic lung injury, called acute respiratory distress syndrome, or ARDS.

ARDS is the affliction requiring the use of hospital beds and ventilators, which has become a hot political issue because of the severe lack of supply.

His protocol won't treat ARDS, but it can keep people from ever developing it.

"I believe it lowers the viral load and decreases the amount of virus that the immune system needs to deal with," he said. "It gives it time to overcome the development of the infection prior to development of ARDS or lung injury."

Zelenko said the results are "remarkable."

"I'm seeing respiratory symptoms resolve as fast as four hours. That's not the norm," he said. "It takes 12 hours on average, in my experience.

"But I've seen remarkable results, and I have now colleagues who are implementing this as well and they are reporting the same anecdotal data."

The colleagues include Dr. William Grace of the hematology and oncology department at Lenox Hill Hospital in New York City.

"He is in complete agreement with my protocols, and he also describes significant improvement anecdotally," Zelenko said.

Another is Dr. Rosy Joseph, a nephrologist in Hackensack, New Jersey, who says she is using the protocols with success.

"These drugs are well known, they're old," Zelenko said. "We know their side-effect protocols, which is relatively low. And they're cheap.

"That's very important, because we need to treat the world," he emphasized.

His treatment, he said, is "just repurposing old drugs in the right combination in an outpatient setting."

"I think that's the solution to this problem," he told WND. "We need more ventilators, but the key is to reduce the patients that need ventilators."

Dr. Anthony Fauci, a member of the White House Coronavirus Task Force, was asked in an interview Tuesday with Philadelphia AM 990's The Answer whether or not he would prescribe chlorquine as a treatment for the coronavirus.

"Yeah, of course, particularly if people have no other option. You want to give them hope," said Fauci, the director the National Institute of Allergy and Infectious Diseases. "In fact, for physicians in this country, these drugs are approved drugs for other reasons. They're anti-malaria drugs and they're drugs against certain autoimmune diseases, like lupus."

Zelenko pointed to a study in South Korea that found success in the combination of zinc and hydroxychloroquine.

Zinc is a virus killer, but the replication of the virus prevents it from getting into the cell.

"Hydroxychloroquine opens the door and lets the zinc in," he explained. "The zinc goes inside the cell and wreaks havoc on the virus."

"I'm not sure why that works," Zelenko said. "I postulate it prevents secondary bacterial infection. When someone is overwhelmed with a virus, they become more susceptible to opportunistic infections. I suspect that with the antibiotic on board, it minimizes the risk of complications.

"So, I figure, let's combine the three of them together," he said. "Z-Pak is so common, everyone knows about it."

Hydroxychloroquine is less known, but it's used for malaria and in rheumatology to treat diseases such as lupus or rheumatoid arthritis.

"I've had experience with it, so it's a very comfortable drug to use," Zelenko told WND.

He said there is a slight risk of a heart arrhythmia issue, "but everything in life is risk versus benefit analysis."

"I don't treat healthy young people with no shortness of breath, because they are going to get better," he said. "So why would I take the risk?

'A foot and a half in the grave'

WND asked Zelenko how the whirlwind of the last 48 hours has affected him personally.

"I'll give you an honest answer," he said. "Two years ago, I was diagnosed with pulmonary artery sarcoma. It has a 100% mortality rate. I ended up having open heart surgery and lost my right lung. I went on very difficult chemo. And I'm still on oral chemotherapy.

"The fact that I'm alive is statistically improbable," he said. "There are only about 10 cases in the world a year of what I had, and they all ended with an autopsy.

"The reason I'm telling you this is that public accolades mean nothing to me. After you have a foot and a half in the grave, and then you're spared ... I was actually wondering why God spared me."

Zelenko noted he's the father of eight children who treats a community of more than 30,000 people.

"My purpose in life has really become to try to relieve pain and suffering. Not to think about myself," he said. "I haven't slept in like four days and try to help as many people as I can."

But he does "have skin in the game."

"I do want to live, and if I get this infection, it's not so good for me," he said. "I only have one lung. I have children, I have parents. It's also personal."