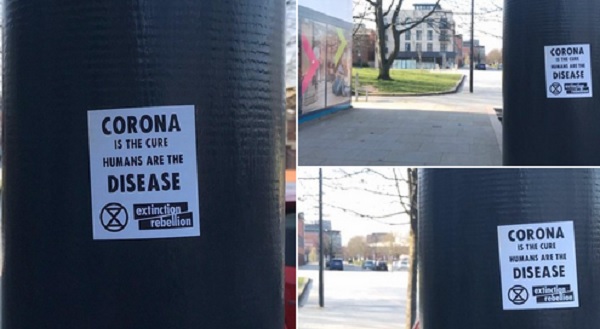 Posters claiming to be from a branch of the radical British climate-change group Extinction Rebellion have appeared on lamposts declaring the coronavirus "is the cure" and humans "are the disease."

Earth is healing. The air and water is clearing.

Corona is the cure.
Humans are the disease!#ClimateCrisis #CoronaCrisis #coronavirus pic.twitter.com/nYJp30WhtH

"Earth is healing. The air and water is clearing," the Twitter message said. "Corona is the cure. Humans are the disease!"

Extinction Rebellion says its objective is to use nonviolent civil disobedience to compel government action to avoid "tipping points" in the climate system. It was established in the United Kingdom in May 2018 with about 100 scholars signing a call to action.

Summit News reported: "When another branch of Extinction Rebellion challenged that this 'does not follows XR’s principles,' the East Midlands chapter doubled down. 'We are pointing out that from the perspective of the Earth, humans behave like a disease. The idea is not to be,' they responded.

"While Extinction Rebellion East Midlands may represent little more than the ravings of one idiot, the notion that humanity somehow deserved coronavirus and that it’s good for the planet has been widely shared by environmentalists and celebrities."

One of those celebrities is actor Idris Elba, who tested positive for the Chinese virus then claimed COVID-19 was the earth "reacting to the human race."

On Twitter, various branches of Extinction Rebellion in the U.K. distanced themselves from the message.

Extinction Rebellion Sheffield wrote: "Humans are not the disease. The system that we have built may be toxic but we are beautiful."

Extinction Rebellion Croydon said: "There have been over 17,000 deaths. That's no cure."

Extinction Rebellion Leiden wrote: "Public Service Announcement: XR as a whole does not support this message AT ALL. Just because some wankers in the East Midlands have learned how to print stickers does not mean they speak for all of us."

Twitter user YouthStrike4Climate reacted, "This is ecofascism and the complete opposite of everything the climate movement stands for."