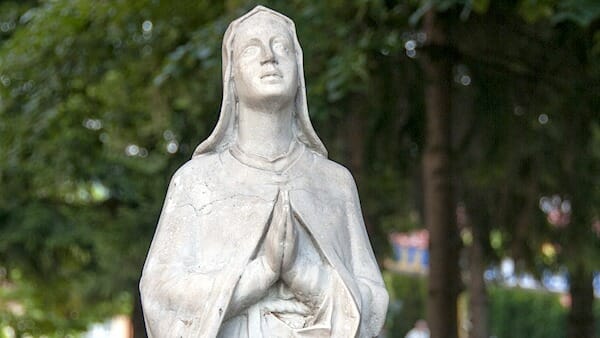 A condominium association has fined two homeowners $1,200 for having a small figurine of the Virgin Mary on their porch.

In response, the Thomas More Society has written a demand leaders arguing such punishment violates the homeowners' civil and constitutional rights.

"I am confident that we can prevail on the claims in this case, which is only part of a national trend of such abuses by condo associations," said Thomas More Society Special Counsel Christopher Ferrara.

He warned that failure to resolve the dispute would prompt a complaint in New Jersey Superior Court.

"The action will seek justice under the Federal Fair Housing Act, New Jersey's Law Against Discrimination, and the New Jersey Constitution," his organization said.

Ferrara noted New Jersey courts "have already recognized a state constitutional right to freedom of speech when condo associations have previously attempted to regulate expressive conduct, as is happening in this situation."

Mary Jeanne Vassallo, who co-owns a condominium in the Barrister Farms Condominium Association, wanted to display the statue on the porch. It had belonged to Vassallo's deceased son, who received it as a gift during a church renovation while he was a second grader.

But the condominium association board banned the figurine. Condo owners received an email from the management company condemning the statue as an "idol" that "should be smashed."

"At the same time, other condominium residents in Vassallo's complex are allowed to affix Jewish mezuzahs to their front doors. A mezuzah, whose display Ms. Vassallo fully supports, is a religious icon in the form of a decorative case containing Hebrew scriptures," the legal team explained.

"Ms. Vassallo seeks only similar accommodation of her own Catholic religion," said Ferrara. "This selective enforcement of a condominium regulation is a violation of their rights. … Ms. Vassallo has been given no credible explanation as to why mezuzahs, to which she has no objection, are permitted but a figurine of the Blessed Virgin is not."

The Thomas More Society's letter noted the dispute began five years ago. The owners were notified of a fine because they had the statue on their porch. They later removed it and had not brought it out again.

"Our attempts to resolve this matter five years ago failed when the board rejected a compromise, worked out during an alternative dispute resolution session," the letter explained.

A "covenant committee" at the time recommended a resolution in favor of the condo owners, but the association refused.

When the owners renewed their requests for permission for the holiday season in 2019, they were told of a "fine" for expressing the "intent" to display the figure.

The association then demanded payment of "past" fines of up to $1,250, and eventually deducted $1,200 from the monthly association payments the condo owners had made. That left them two months behind on their monthly obligation

"The owners have had to endure constant and severe emotional distress for years on account of the board's arbitrary and vindictive actions constituting religious discrimination," the letter warned.