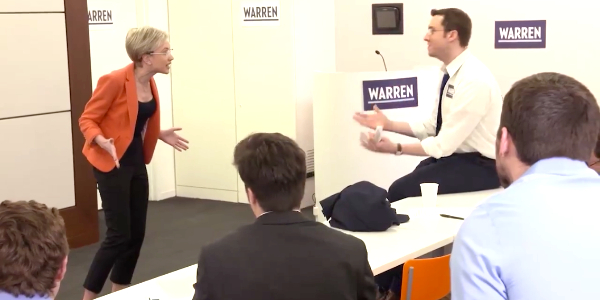 What "the final moments" of the Democratic presidential campaign of Sen. Elizabeth Warren, D-Mass., might have looked like was depicted in a comedy skit Saturday night.

But it wasn't "Saturday Night Live" this time. Conservative analyst Kat Timpf, capturing some of the senator's mannerisms and voice inflections, played the part on the Fox News Channel's "Greg Gutfeld Show."

The scene was Warren headquarters on the night of Super Tuesday as the candidate's top advisers tried to convince her it was time to end the campaign after her poor performance.

"Look, we got hit pretty hard on Tuesday," a staffer says," and I think it's time we seriously think about ..."

Warren interjects: "... my experience as a handicapped black man fighting racism in the South."

It gets better from there as Timpf parodies Warren's penchant for reinventing her past for vocational or political advantage, including "identifying" as a Native American.

The final moments of the Warren campaign. #Gutfeld pic.twitter.com/1BktbeFhaK