I have to admit that I wasn't paying much attention to much social media on Wednesday until I saw Kathy Griffin trending.

"Oh no," I thought to myself, knowing full well what was to come when my index finger touched her name in the trending feed on Twitter, "we'll never hear the end of this one."

And yes, it appeared for a little while, we wouldn't. It was a retweet of President Donald Trump's statement that "over an eight day span, the United States now does more testing than what South Korea (which has been a very successful tester) does over an eight week span."

"I was sent to the #COVID19 isolation ward room in a major hospital ER from a separate urgent care facility after showing UNBEARABLY PAINFUL symptoms. The hospital couldn’t test me for #coronavirus because of CDC (Pence task force) restrictions.

He’s lying. I was sent to the #COVID19 isolation ward room in a major hospital ER from a separate urgent care facility after showing UNBEARABLY PAINFUL symptoms. The hospital couldn’t test me for #coronavirus because of CDC (Pence task force) restrictions. #TESTTESTTEST https://t.co/18fRiOBsdN pic.twitter.com/0sU9fHu4r0

I have to admit that I put aside any skepticism in the face of COVID-19. That's what you tend to do.

I didn't question, for instance, why an individual in extremis from "UNBEARABLY PAINFUL symptoms" of a coronavirus infection would be be tweeting very cogently about it from an "isolation ward room in a major hospital ER."

All of that went out the window, and I even chastised myself silently for that whole "we'll never hear the end of this one" thought. That had been kind of cruel, I thought, even if this did nicely dovetail with the values of someone who recently tweeted this:

As it turned out, I should have been more skeptical, since Griffin's track record also dovetails rather nicely with this: 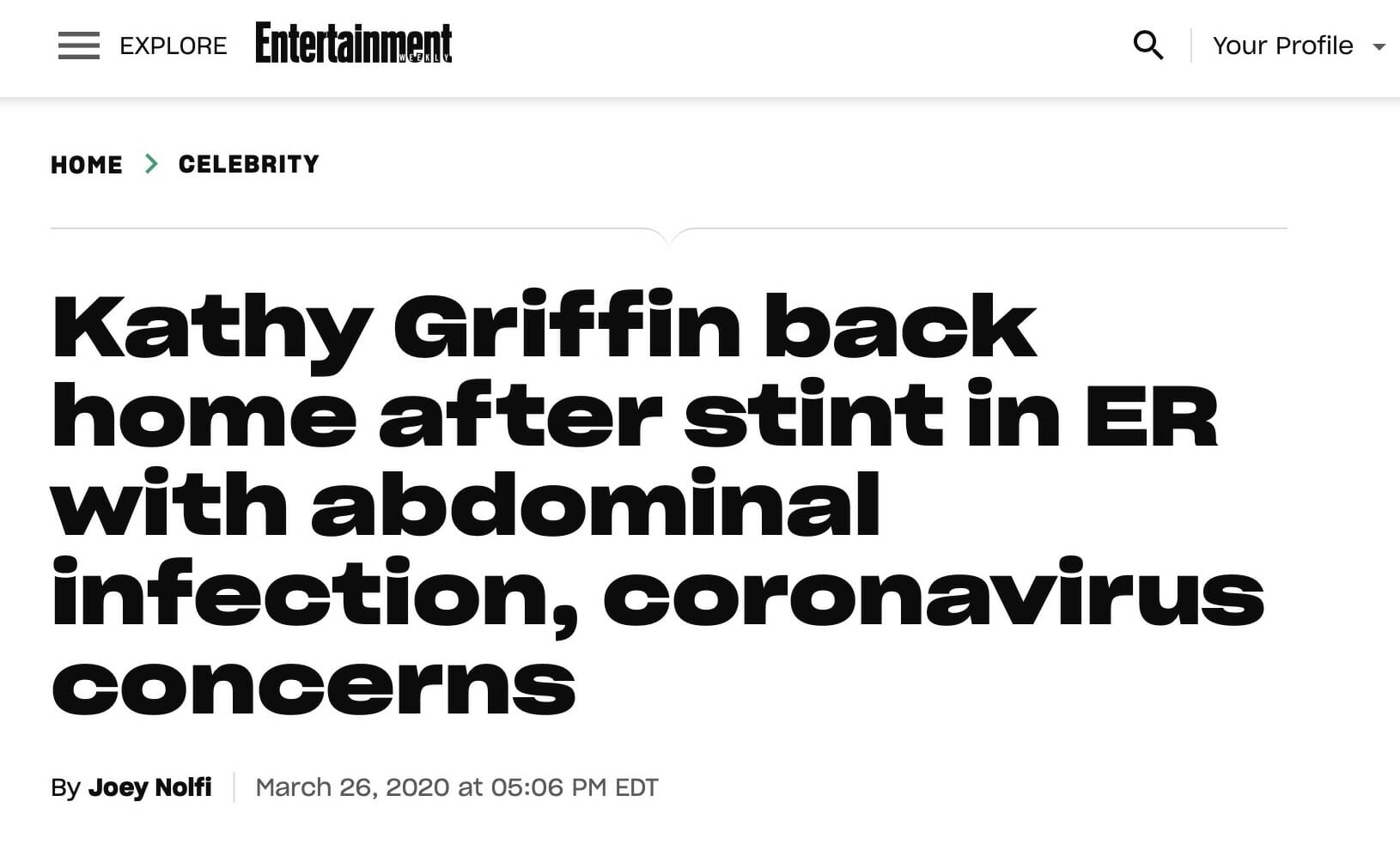 As you'll notice, that's "coronavirus concerns," not "coronavirus." The abdominal infection she has wasn't related to anything COVID-19.

In fact -- and this sounds so horrible on multiple levels that I couldn't make it up -- she got the abdominal infection after traveling to Mexico, according to Griffin's husband, Randy Bick.

According to him, she had self-isolated before seeking medical advice.

While a minority of coronavirus patients may experience the symptoms that Griffin did -- "intense pain, vomiting, diarrhea, every 20 minutes," as Bick told the Los Angeles Times -- these aren't the classical symptoms of the virus.

“We were both nervous because we were still in the incubation period after returning from [a trip to] Mexico, but also we had not left the house in days,” Griffin told the Times.

“We’d been hearing about a 14-day incubation period [for the coronavirus]. So for me to get what felt like food poisoning after six days, I thought, OK, is this a coincidence or what?”

According to Griffin, despite the fact that her lungs were clear and a CT scan showed an infection in her intestines, an urgent care doctor thought she ought to get tested. This went against the Centers for Disease Control's recommendations, which we'll get to in a second.

When she went to Cedars-Sinai Medical Center in Los Angeles (all right, so it was a "major hospital ER"), however, she was told she couldn't get one.

“The realization when they told me the guidelines was, ‘Wow ... I now know not to come back unless my lungs are full with what feels like pieces of shattered mirror, unless I can’t breathe and unless my fever is 103,’” Griffin said.

“They’re not making the rules at all. That’s a frightening feeling.

"I just think it’s so obvious that those tests have to be accessible to everybody," she added. “A lot of people, when they hear the president saying everyone who needs a test should get one, they shouldn’t have to then go to a hospital where, frankly, they may be exposing themselves or exposing others."

None of these things make her a priority.

Griffin is 59. Her symptoms, her chest X-ray and the abdominal CT scan all lined up with someone who didn't have COVID-19.

She's assumedly in good health. She's not a first responder and tweeting doesn't count as working in critical infrastructure.

Furthermore, none of this has mutual exclusivity with Trump's tweet. The fact that we've done more tests doesn't necessarily mean that we have all the tests we need. To test someone without classical COVID-19 symptoms in one of the hotbeds of the disease when she's not necessarily a first responder isn't necessarily a responsible use of resources.

Neither is asking for a test when you don't meet the criteria and blaming Mike Pence when you don't get it. It's not his fault. Neither does it mean Donald Trump is lying.

Here is the problem with Griffin's original tweet: She knew it was probable she didn't have the disease but blamed the fact that she didn't have a test for what's billed as the most mordant pandemic in a century on a president and vice president she's always disagreed with, despite having recently returned just days earlier from a land infamous for provoking food poisoning.

We all should have known this sounded a bit too perfect for Kathy Griffin to be true.

We hope that she's on the mend and look forward to the tweetstorm that's no doubt to come in which she blames the president's trade war with Mexico for her gastrointestinal unpleasantness.