Even in the season of the coronavirus, liberal loathing springs eternal.

As the nation enters a new normal of crisis, with seemingly endless bad news, government reactions, and sometimes surprisingly uplifting stories, it’s still shocking to get a glimpse of the darkness at the heart of some liberal souls.

But it was still another opportunity to see ugliness in action.

And when it comes to ugliness, liberals rarely fail to disappoint.

As CBS News reported, Melania’s statement made it clear the decision was not a welcome one.

"The health and safety of all Americans must be the first priority, especially right now," the statement said. "I deeply regret this cancellation, but we need to make difficult decisions in the short-term to ensure a healthy country for the long-term."

That’s what adults of goodwill sound like when they’re breaking bad news. There’s a reason, there are regrets, then there’s hope that it will prove to be a benefit in the future.

Since liberals have spent years now proving to the American public that they are neither adult nor harboring any goodwill toward either their own country or the duly elected President Donald Trump, the reaction on the left is best described as juvenile malice -- and what any reasonable person would call pathetic.

So, it was difficult for @FLOTUS to decide to do the right thing... are we supposed to feel sorry for her?

Oh poor, poor thing...now she can back to concentrating on her next “kidney surgery” or beauty treatment. And tons more time to shop online on the taxpayer’s fine!

Seems like the tRUMPs are always faced with the difficult decisions:
Easter egg roll, yes or no?
Fire Gary Busey: yes or no?
Breast enhancement: yes or no?
Pay off all the hookers: res or no?
Tell the truth: absolutely not !!!!!!! https://t.co/qrc6gOAj3L

Damn, I'd hoped a kid would give Trump COVID.

There were many more, but that’s the spirit of too many liberal Americans, so blinded by Trump hatred, or unhinged by Trump Derangement Syndrome, that even a national crisis situation like the coronavirus just unleashes their basest drives.

Liberals have been disgracing themselves throughout the Trump presidency by rooting for an economic downturn a la HBO’s Bill Maher, or being willing to blame the United States for the four-decade-long animosity of the Islamic Republic of Iran and take Iran’s side in the dispute even if it means defending an attack on the American military.

But for sheer malice, the vicious attacks on the first lady for a reasonable, prudent public health measure like canceling the White House Easter Egg Roll is a new low.

It was too much even for some of the saner among Trump’s critics.

(Note: The crudity is spelled out in the original tweet.) 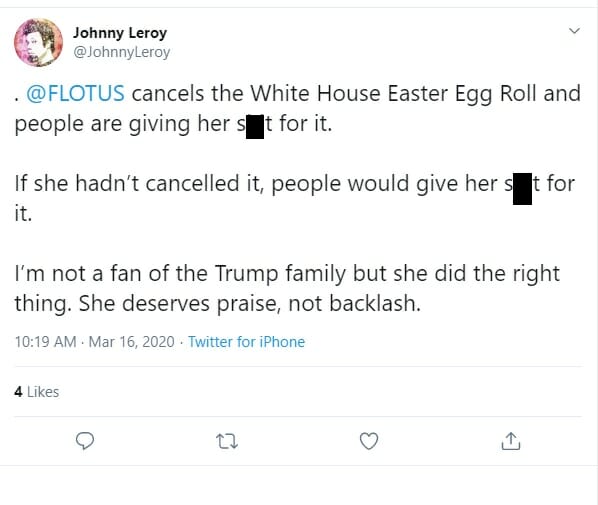 "@FLOTUS cancels the White House Easter Egg Roll and people are giving her s**t for it," one Twitter user wrote.

"If she hadn’t cancelled it, people would give her s**t for it.

"I’m not a fan of the Trump family but she did the right thing. She deserves praise, not backlash."

In short, she deserves a fair shake.

Faced with a difficult decision, the first lady made the call that had to be made and she announced it with understandable regret.