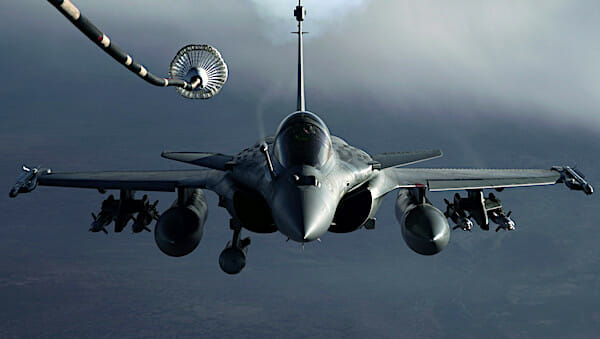 Courts periodically hold routine hearings at nearby law schools as an education tool, making them more available to the public and lawyers-in-training.

But a recent hearing by the Air Force Court of Criminal Appeals held at Liberty University Law School in Lynchburg, Virginia, prompted a complaint from Michael "Mikey" Weinstein and the Military Religious Freedom Foundation.

Calling the institution founded by Baptist minister Jerry Fawell a "bastion of odious discrimination," Weinstein's group insisted the military "cannot conduct a trial at a private Christian university without violating the First Amendment to the United States Constitution."

The American Center for Law and Justice, however, advised Defense Secretary Mark Esper to ignore such an "ignoramus veto."

"One must keep in mind that there are persons and organizations in our nation – like Mr. Weinstein and the MRFF (including, undoubtedly, some members of the U.S. Air Force and others currently on active duty) – which are hypersensitive to religion and religious expression. Accordingly, leaders must studiously avoid blindly reacting to complaints, especially when any reasonable, minimally informed, person knows that no endorsement of religious is intended," the ACLJ letter to Esper explained.

The legal group pointed out the Supreme Court has acknowledged "there are persons in our society who see religious endorsements even though they are not intended."

"The court characterized such a hypersensitive response as a form of heckler's veto which the court labeled an 'ignoramus veto.' This matter appears to be just such an instance!" the letter said.

"Despite repeated pious declarations that he is fighting for religious tolerance, Mr. Weinstein is in reality a serial purveyor of religious intolerance who repeatedly propagates the despicable lie that Evangelical and Fundamentalist Christians 'would willingly, even eagerly, condemn, ostracize and even put to death their fellow citizens for praying to the wrong god," ACLJ said. "He even asserts: 'I know that they will stop at literally nothing to achieve their ends That includes mass murder.'"

The ACLJ letter, signed by Chief Counsel Jay Sekulow, said such claims "are not only outrageous – they are delusional."

Weinstein's statements are "bordering on paranoia," the letter said.

"Without citing any authoritative source whatsoever, Mr. Weinstein claims that 'Christian fundamentalist dominionists' … believe that the Bible instructs them to eradicate all nonbelievers as a prerequisite for the Second Coming of Christian. Elsewhere … he claims that 'hardcore fundamentalist Christian elements within every branch of the military [are] intent on creating nothing less than an army of zombie zealots prepared to fight and die to usher in the dispensational reign of Jesus Christ on earth,'" the letter said.

ACLJ urged Esper to "disregard" the demands, which are without "basis in law."

"He fails to provide a scintilla of evidence to support his various claims of wrongdoing on the part of the AFCCA judges or the Air Force," the letter said. "Nowhere does Mr. Weinstein show that the judges of the AFCCA did not act wholly in accordance with the Constitution and laws of the United States in what they did while at Liberty University."

That conclusion "impugns the integrity of the AFCCA judges," the letter said.

ACLJ said in a news release about that case that it's "not uncommon that federal and state courts of all descriptions periodically hold actual proceedings at law schools throughout the United States."

"Merely repeating again and again that he believes what has occurred is 'wholly' and 'boundlessly' intolerable and that the Constitution and military regulations 'are being rapaciously violated' does not make it so. No matter how many pejoratives he uses to try to convince his audience otherwise, the presence of the court at Liberty was lawful," the statement said.