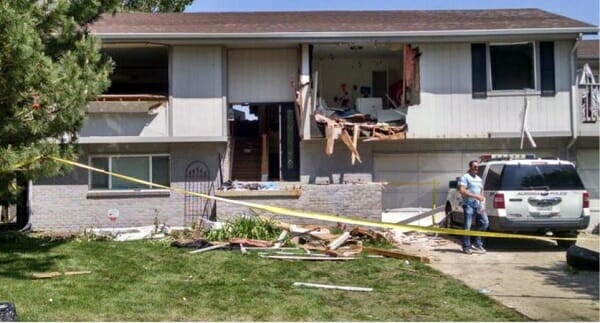 The U.S. Supreme Court is being asked to make police in a Colorado city pay for destroying the home of an innocent family with explosives and a battering ram.

The appeal, from the Institute for Justice on behalf of the Lech family of Greenwood Village, explains:

"Using explosives and a battering ram attached to an armored personnel carrier, the Greenwood Village Police Department intentionally destroyed petitioners' house. Afterwards, they offered the family $5,000 'to help with temporary living expenses.' The family sued, arguing that they were entitled to Just Compensation under the Fifth Amendment for the intentional destruction of their house. The 10th Circuit, however, held that no compensation was due because the home was destroyed pursuant to the police power rather than the power of eminent domain.

"The question presented is whether there is a categorical exception to the Just Compensation Clause when the government takes property while acting pursuant to its police power."

The case developed in 2015 when an armed shoplifter fled police and broke into the home and refused to come out.

"After taking gunfire from the shoplifter, the police laid siege to the home. During a 19-hour standoff, officers used explosives, high-caliber ammunition and a battering ram mounted on a tank-like vehicle called a BearCat against the house. The fugitive was apprehended, but the home was totaled. And the homeowners were never compensated," the legal team said.

"For well over a century, the Supreme Court has enforced a simple rule: The government has to pay for private property it takes or destroys," explained attorney Jeffrey Redfern. "Today, we asked the court to apply that simple rule in the Lechs' case. If the government requires a piece of property to be destroyed, then the government should pay for it – that's just as true regardless of whether the people doing the destroying are the local school board or the local police."

The complaint on behalf of family members Leo, Alfonsina and John Lech rejects the 10th Circuit's ruling "that as long as the government uses its 'police power' to destroy property, it cannot be required to provide compensation for that property under the U.S. Constitution’s Takings Clause."

"We have tried for years to get Greenwood to do the right thing and compensate us for the complete destruction of our home," said Leo Lech. "My son's family were very literally thrown out into the street with the clothes on their backs, offered $5,000 and told to 'go deal with it.'"

The appeal notes the high court never has concluded that "the use of police power exempts government from paying when property is taken or destroyed. The appeal does not second-guess the police department's use of force or tactics used to apprehend the suspect, only whether the homeowners or the public should be made to bear the cost incurred by the police department’s actions."

"The Supreme Court is meant to be the great bulwark of American liberty, ensuring that constitutional rights are enforced and holding government accountable when it strays from the Constitution," said IJ President Scott Bullock. "That is exactly what it should do in the Lechs' case. Property rights are the foundation of our rights. The lower court’s ruling that government officials can purposefully destroy someone's home without owing a dime in compensation is dangerous and un-American."

The petition explains that officers even were instructed to "take as much of the building as needed without making the roof fall in" as they attempted to get the suspect to surrender.

They then destroyed its walls to "create gun ports that would allow snipers to fire into the home."

The family was given no choice but to tear down the home and rebuild.

The filing points out the Supreme Court "has emphatically rejected any reliance on 'categorical' or 'automatic exemptions' from the Just Compensation Clause."

Greenwood Village city attorney Tonya Davidson previously insisted police did what they had to do.

“The house was being used a barricade, and the damage done to it was to remove the barricade and get the gunman out without any loss of life," Davidson said in an email. "That is not a taking where the city is required to offer fair market value for the property."