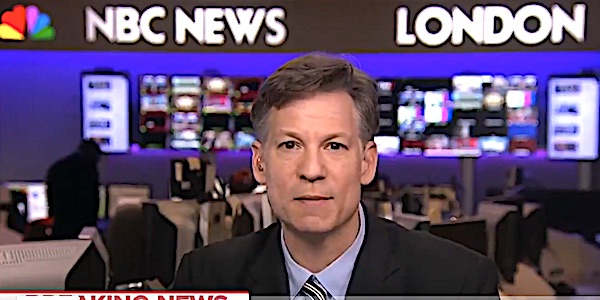 He also argued that “China certainly feels that” referring to the virus as the “Chinese virus” amounts to “scapegoating.”

The coronavirus originated in China and the country’s Communist government scrambled to keep the virus’s existence hidden from the rest of the world.

“It’s easy to scapegoat people, and that is what has always happened when there have been pandemics or epidemics: that foreigners are attacked, foreigners sometimes physically attacked,” Engel said on MSNBC Wednesday.

“If you look at what happened during the Middle Ages, there was lots and lots of scapegoating against an ethnic group or a religious group whenever there were pandemics that affected society and frightened a lot of people, and China certainly feels that that is what is happening now with people calling it the ‘Wuhan flu’ or the ‘Wuhan virus’ or the ‘China virus,'” Engel added.

“This is a virus that came from the territory of China but came from bats,” he continued. “This is a bat virus, not a China virus.”

.@RichardEngel: "This is a virus that came from the territory of China but came from bats. This is a bat virus, not a China virus. It doesn't speak Chinese. It doesn't target Chinese people. It targets human beings who happen to touch their eyes, nose or mouth." pic.twitter.com/ljQeT7UQam

President Donald Trump on Wednesday defended his decision to refer to the coronavirus as a “Chinese virus,” noting that Chinese propaganda has falsely tried to pin the blame on the U.S. instead.

“I have great love for all of the people from our country,” Trump said at a press briefing Wednesday. “As you know, China tried to say at one point — maybe they stopped now — that it was caused by American soldiers.”

“That can’t happen,” the president continued. “It’s not gonna happen. Not as long as I’m president. It comes from China.”