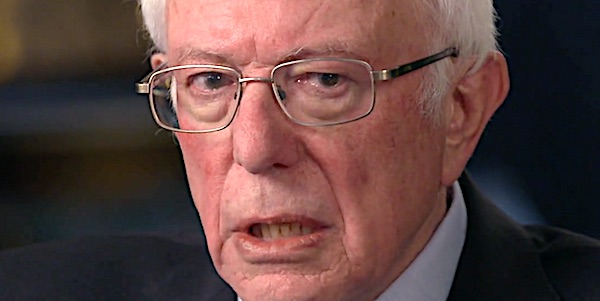 The New York Times has published a report based on a series of documents that show the Soviet Union was using a program that Bernie Sanders promoted as a way to "sway" American public opinion in favor of the USSR.

The Times said "the previously unseen documents from a Soviet archive show how hard Mr. Sanders worked to find a sister city in Russia when he was a mayor in the 1980s."

"Moscow saw a chance for propaganda."

In a letter, Sanders told a Soviet counterpart he liked the sister cities program and wanted the people of the United States and the Soviet Union to "live together as friends," the Times said.

"Unbeknown to him, his desire for friendship meshed with the efforts of Soviet officials in Moscow to 'reveal American imperialism as the main source of the danger of war,'" the paper reported.

The Times report had the Twitter news aggregator site Twitchy wondering if the left-leaning "paper of record" was "going all in" for former Vice President Joe Biden in the Democratic presidential race.

The Times said it looked at 89 pages of "letters, telegrams and internal Soviet government documents revealing in far greater detail the extent of Mr. Sanders's personal effort to establish ties between his city and a country many Americans then still considered an enemy despite the reforms being initiated at the time under Mikhail S. Gorbachev, the Soviet general secretary."

It found a statement from the Soviet Foreign Ministry, however, that explained, "One of the most useful channels, in practice, for actively carrying out information-propaganda efforts has proved to be sister-city contact."

The Times said the paperwork was part of the government archive system in Yaroslavl, Russia, which became the sister city of Burlington, Vermont, when Sanders was its mayor.

"The files are open to the public, though archivists there said that, until now, no one had asked to see them," the Times reported.

"Nothing in the documents suggests that Mr. Sanders was the only local American official targeted for propaganda, or even that he was particularly receptive to it, though they do describe him as a socialist. But the documents do show the Soviets' intensive preparation to use Mr. Sanders's interest in their country to their advantage," the report said.

The Times acknowledged dozens of other American cities were in similar relationships.

In a statement to the Times, the Sanders campaign said "the candidate was 'proud' of his grass-roots diplomatic efforts and noted that the idea of bringing together Soviet and American cities had the highest-level support at the time."

Campaign spokesman Mike Casca said, "The exchange between Burlington and Yaroslavl, which continues to this day, confirmed Sanders’s long held view: by meeting face to face, we can break down the barriers and stereotypes that exist between people and their governments."

The Times reported the "Yaroslavl documents show the Soviets to be planning a propaganda effort in Burlington." But it noted Casca said "both sides discussed the limitations of the Soviet system and their common desire to avoid nuclear war."

Exclusive: For Bernie Sanders, his 1988 trip to the Soviet Union was an effort to build diplomatic ties. For the Soviets, it was the start of a years-long propaganda effort to exploit his antiwar agenda, documents obtained by The New York Times show. https://t.co/I4UsqheKHQ

The Times emphasized that for the Kremlin, "these sister-city relationships were vehicles to sway American public opinion about the Soviet Union."