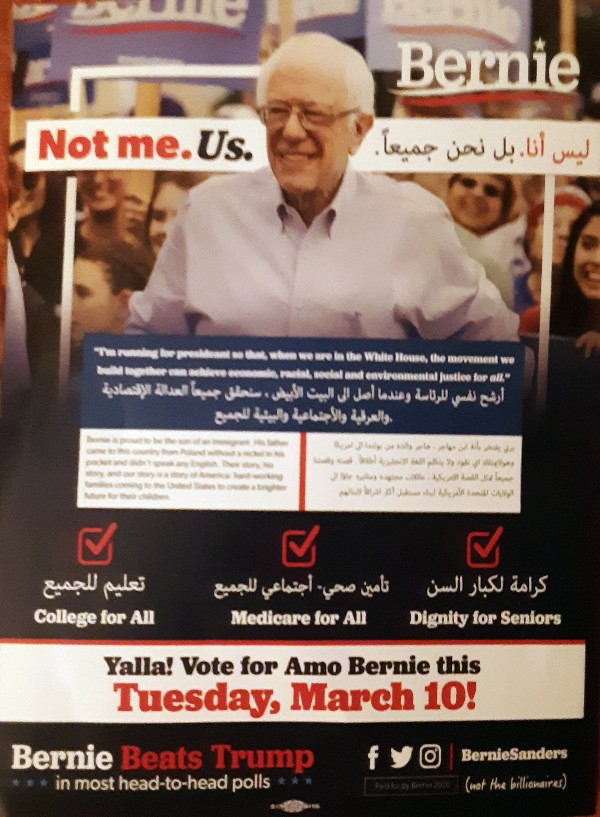 A Bernie Sanders campaign leaflet targeting Muslim voters in Michigan that was distributed at a mosque during Friday prayers. (Courtesy Dave Gaubatz)

Ahead of Tuesday's crucial Democratic primary, a prominent Michigan mosque is distributing to worshipers campaign material for Sen. Bernie Sanders targeting Muslim voters, which is a violation of the non-profit mosque's tax-exempt status.

A campaign leaflet obtained by David Gaubatz, known for his investigation of mosques that promote terrorism, urges Muslims to vote for Sanders on Tuesday.

With text in both English and Arabic, it concludes with: "Yalla! Vote for Amo Bernie this Tuesday, March 10!"

Muslim and Arab-American voters were critical to Sanders' upset victory in Michigan in 2016, and he's counting on them again Tuesday to help revive his bid for the White House, Politico reported Sunday.

The Sanders campaign believes the Michigan vote will be close, Politico noted, and the key to victory could be getting the estimated 100,000 to 200,000 Muslim voters to the polls.

During Friday prayers, he said, worshipers were given the campaign leaflet upon entering or leaving the mosque.

The so-called Johnson Amendment passed by Congress in 1954 prohibits 501(c)(3) organizations, such as houses of worship, from engaging in any political campaign activity. The Sterling Heights mosque states at the bottom of the home page of its website that it is registered as a 501(c)(3).

An IRS spokesman told WND he could not comment on specific activities by religious organizations. But he pointed to the Internal Revenue Code and IRS publication 1828, "Tax Guide for Churches and Religious Organizations."

The IRS code defines a 501(c)(3) as an organization "which does not participate in, or intervene in (including the publishing or distributing of statements), any political campaign on behalf of (or in opposition to) any candidate for public office."

The guidance publication, 1828, makes clear: "Under the Internal Revenue Code, all IRC Section 501(c)(3) organizations, including churches and religious organizations, are absolutely prohibited from directly or indirectly participating in, or intervening in, any political campaign on behalf of (or in opposition to) any candidate for elective public office."

Violation of the code "may result in denial or revocation of tax-exempt status and the imposition of excise tax."

In 2017, President Trump signed the "Presidential Executive Order Promoting Free Speech and Religious Liberty." But the order did not repeal the Johnson Amendment, nor did it allow ministers or places of worship to endorse candidates. It simply advised the Department of Treasury that "churches should not be found guilty of implied endorsements where secular organizations would not be."

The imam of the Sterling Heights mosque, Munawar Haque, has not replied to WND's request for comment.

Gaubatz told WND he was not surprised to see the promotion of a political candidate favorable to Muslims, because he had seen it in other mosques around the nation.

"But this mosque was so open and so blatant," he said. "They are doing it right in the doorway of the mosque. They didn't care."

Gaubatz, who is launching a new non-profit for his investigatory work, said that with the support and protection of members of Congress and local authorities, "they feel they can get away with anything."

Gaubatz is the co-author of the bestselling book "Muslim Mafia: Inside the Secret Underworld That's Conspiring to Islamize America," which is based on an undercover investigation of the Council on American-Islamic Relations.