After the owners of a Mexican restaurant attended President Donald Trump’s rally in Phoenix, Arizona, they began receiving threats and negative reviews from those on the left simply because of their political opinions.

Now, not only has Trump shared his support for the couple on Twitter, but Trump supporters have flocked to the locally owned restaurant to show the owners that they aren't alone. 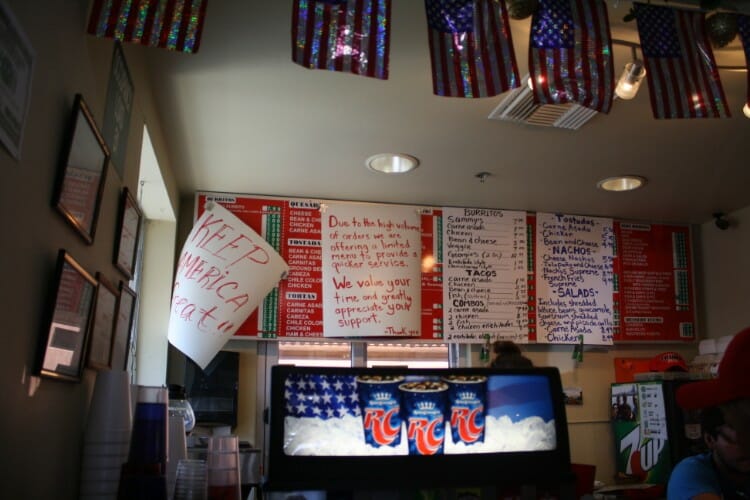 Trump supporters have flooded Sammy's Mexican Grill outside of Tucson, Arizona, after the owners received backlash for attending a Trump rally in late February. (Morgan Brantley / The Western Journal)

Jorge and Betty Rivas -- the owners of Sammy's Mexican Grill outside of Tucson, Arizona -- sat behind the president as he addressed a large crowd on Feb. 19, but soon after, people began writing nasty reviews online and calling the restaurant with threats.

"LEAVE POLITICS OUT THE BZNZ," one Facebook reviewer wrote on March 4.

"His coconut mentality. He should have kept his political views private," another wrote.

Sadly, this isn't the first time the family has received backlash for their support for Trump; the restaurant received similar messages after Betty attended a 2016 rally for then-candidate Trump.

"I feel that, as naturalized United States citizens, we have the right to support President Trump or to support any other candidate that loves this country," Jorge said in a Facebook video on Feb. 27. "For me, it is very important to support people that have the same values as I do.

"Just because we are Latinos, it doesn't mean that we have to think like every other Latino in this country. We are individuals and we feel that we have a constitutional right to ... support whoever we want."

Once Trump heard about the backlash the Rivases had been receiving, he posted a tweet expressing his support for the two owners.

"The food is GREAT at Sammy’s Mexican Grill," he wrote. "Congratulations to Betty & Jorge Rivas on doing such a wonderful job. I will try hard to stop by the next time I am in Phoenix. Support Sammy’s!"

Since then, Trump supporters, including high-profile GOP leaders like U.S. Sen. Martha McSally and Arizona GOP Chairwoman Kelli Ward, have patronized the restaurant to show that they stand with the Rivases.

These are great people! The owners of Sammy’s Restaurant & @chilttepica products - legal immigrants who love America and who are helping to #KeepArizonaGreat & #KeepAmericaGreat! #Capitalism #Entrepreneurship #USA 🇺🇸 pic.twitter.com/plUzP2WXHg

It's not just politicians -- everyday Americans are flocking to the restaurant as well.

One man who patronized the restaurant, Todd, told The Western Journal that when he heard about the backlash the Rivases received after attending the Trump rally in Phoenix, he wanted to show his support.

"You can support who you what to support. That's why we live in this country," said Todd, who lives in Utah but was in Arizona for business. "You shouldn't be put down or your business hurt because of who you support."

Anne Howarth from Tucson came to Sammy's with a group of 10 motorcyclists to support the Rivases.

"To have these people being threatened, it's just not OK!" she told The Western Journal, adding that the divisions in the country will only continue to get worse as the November election draws closer. 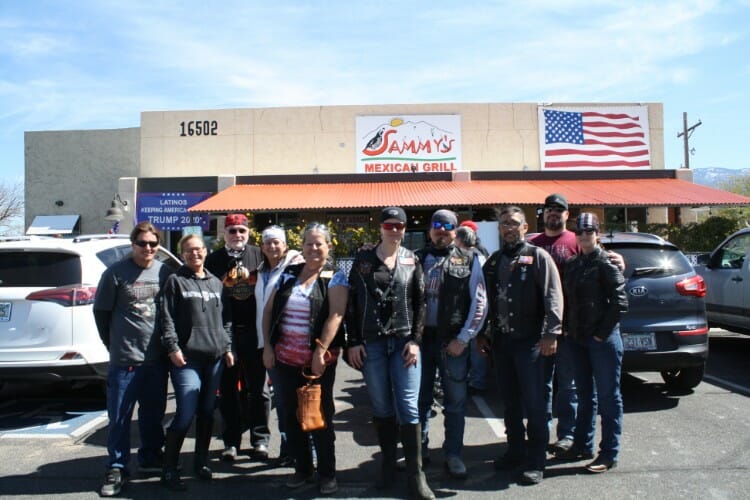 A group of motorcyclists came to Sammy's Mexican Grill on March 7 to show their support. (Morgan Brantley / The Western Journal)

Nola, who was proudly wearing a "Make American Great Again" hat, said she brought her friend to Sammy's to show her support for the Rivases and their political beliefs.

"I think it's very unfair," she said of the backlash the Rivases have received since attending the rally, "because we live in a free country and other people when they voice their opinions that are opposing ours, they expect to be able to say what they say and do what they do, but if we do it, it's not right. That doesn't work for me.

"I respect other people's opinions and I expect them to respect mine. It's really all about respect," she told The Western Journal.

"I just think there's just too much intense hatred that I've never seen before or witnessed in my lifetime," Nola continued. "I think when push comes to shove, we're all Americans and we all will stick together when we need to, so why can't we do it now? We all get one vote and so when we go vote -- whoever gets the most wins. It's just like playing ball or something, you know?" 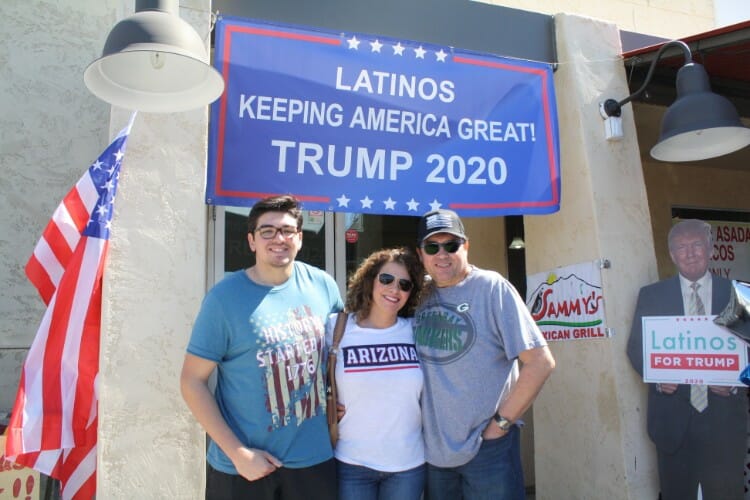 A family poses outside of Sammy's Mexican Grill on March 7. (Morgan Brantley / The Western Journal)

"It's expected," Chad from Tucson told The Western Journal. "The Democrats and the left-wing media are geared up and they're organized and they will target you in a heartbeat."

He referenced another Tucson-area business, Cup It Up American Grill, that closed in 2017 after the owners published a conservative Facebook post which elicited an intense weekend of threats over social media and over the phone.

"They are vicious," Chad added.

Tucson resident Beverly said she believes the dissent between the Republican and Democratic parties will only continue to get worse, but has noticed that conservatives are now "fighting back."

"We've seen how much it hurt people that have a business, like we saw with the Cup It Up. It was terrible what they did to those people just because they didn't like what they thought or believed -- to be attacked like that. We were kind of afraid that's what they were going to do to [the Rivases]."

"This is a free capitalist society," she added. "We shouldn't be attacking people for their beliefs."

The Western Journal's Morgan Brantley contributed to this report.

Kayla Kunkel, The Western Journal
Biden's handling of cyber breaches spirals out of control
Gymnast who famously won gold for U.S. on injured ankle speaks out on Simone Biles
'Jeopardy!' contestant sets record for all the wrong reasons
Police discover an entire Texas hotel has been rented out for COVID-positive immigrants
Gavin Newsom pulls his kids out of summer camp for stupid reason
See more...