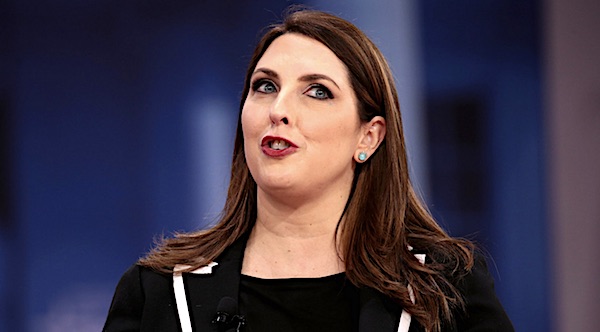 Ronna McDaniel, the chairwoman of the Republican National Committee, is awaiting the results of a coronavirus test she took Friday after experiencing flu-like symptoms, a spokesman for the party said Saturday.

President Donald Trump announced at a press conference earlier Saturday that he took a test for coronavirus, or COVID-19, on Friday night. At least three members of a delegation from Brazil who met with Trump at Mar-a-Lago earlier in March tested positive for COVID-19, which has caused more than 5,000 worldwide.

Trump said he is not feeling any symptoms.

McDaniel had several interactions with Trump and Vice President Mike Pence last and earlier this week.

An RNC official told reporters she was with Trump at Mar-a-Lago on Friday, March 6. She attended an event with Pence the next day. On Monday, March 9, she flew back with Trump on Air Force One. She returned to her home in Michigan on Tuesday, the official said.

Last night, @GOPChairwoman's doctor determined a test for COVID-19 was necessary given her symptoms.

We will provide an update when the test results are available. pic.twitter.com/oLla7pLaDH

McDaniel’s doctor ordered her to take a coronavirus test after she tested negative at a Michigan hospital for flu and strep, according to Ahrens.

“Her doctor determined a test for COVID-19 was necessary given her symptoms,” he said.

Ahrens said that “out of an abundance of caution,” the RNC is contacting everyone McDaniel had contact with in recent days.

“Upon the advice of doctors, she and her family are self-quarantining at their home.”