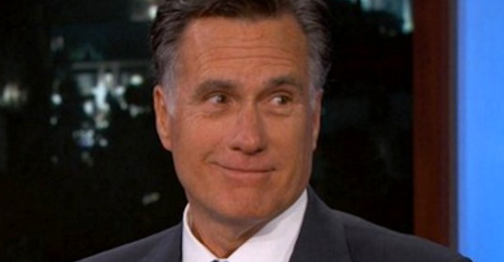 Hunter Biden is the son of Joe Biden who was paid some $3 million for serving on the board of a corrupt Ukrainian natural gas company under investigation while his father was in charge of Ukraine policy for Barack Obama.

Joe Biden later boasted that he pressured Ukraine's president to fire the general prosecutor, who happened to be probing his son's company, by threatening to withhold $1 billion in U.S. aid.

But Romney apparently thinks there's nothing to see there.

Sen. Mitt Romney: "There's no question that the appearance of looking into Burisma & Hunter Biden appears political... We also have a lot of work to do on matters that are not related to Burisma. We probably ought to focus on those things." pic.twitter.com/2le3uUd8Yu

Romney, according to a video posted on Twitter by The Hill, was asked Thursday by reporters if he was worried about the "appearance" of the investigation by the Homeland Security and Governmental Affairs Committee of Hunter Biden.

"There's no question but that the appearance of looking into Burisma and Hunter Biden appears political," said Romney, a member of the Senate panel. "I think people are tired of these kind of political investigations, and I would hope that if there's something of significance that needs to be evaluated that it would be done perhaps the FBI or some other agency that's not as political as perhaps a committee of our body."

He added "we also have a lot of work to do on matters that are not related to Burisma. We probably ought to focus on those things."

Ask if he would support the subpoena of a former Burisma consultant, Romney said he needed to discuss the matter with the committee's chairman, Sen. Ron Johnson, R-Wis., and then would make a decision.

The Right Scoop blog commented that if his decision regarding the subpoena turns out to be "anything like impeachment, we all know how that will go."

The committee, Right Scoop pointed out, has eight Republicans and six Democrats. If Romney votes with the Democrats, it would result in a 7-7 tie.

Incidentally, the Federalist reported some weeks ago that Joseph Cofer Black, a top Romney adviser, worked with Hunter Biden on the Burisma board.