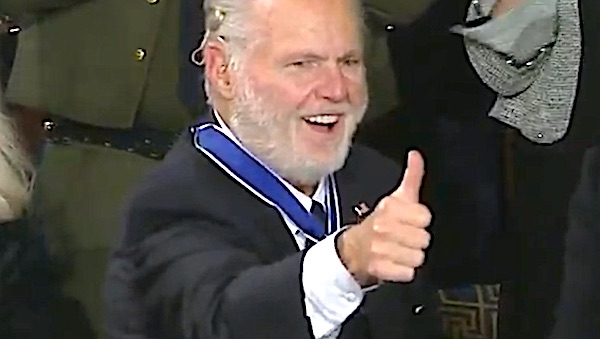 Rush Limbaugh gives a thumbs-up to President Donald J. Trump from the House Gallery Tuesday evening, Feb. 4, 2020, after President Trump awarded Limbaugh with the Medal of Freedom during the State of the Union address at the U.S. Capitol in Washington, D.C. (video screenshot)

Opponents of President Trump have turned the coronavirus into a political weapon despite aggressive decisions by the White House to protect Americans from the threat, says talk-radio host Rush Limbaugh.

BASIL SMIKLE: You just don’t get the sense that this president understands or even cares about managing the complexity of something.

PETE DOMINICK: He does not care about us!

KATY TUR: It’s exposing a real lack of leadership on a federal level.

JOHN PODHORETZ: We don’t really have confidence that he — even after three years as president — even grasps that element of the job.

HOWARD DEAN: We’re crippled by not having — exactly — no leadership at the top whatsoever.

Limbaugh argued that media and the Democratic Party didn't panic over the swine flu in 2009-2010, which was "worse than coronavirus."

Limbaugh said he's sick of the constant claims that Trump "is too stupid" and he's tired of the media "sniveling" he "doesn't care."

Further, Limbaugh said, none of the president's opponents "could do Donald Trump’s job given what he faces opposition-wise."