Not too long ago, while doing research on a collaborative project, I came to the inescapable conclusion that the nation's educational establishment has betrayed our young men.

The research led me to co-author a novel, "The Hunt" – more on this in a minute.

The betrayal begins with the books teachers assign in high school and college. These books are routinely effete, feminist, anti-Christian, socialistic and often gay.

Collectively, they do better a job of teaching a young male to be a metrosexual than to be an a man.

I do not exaggerate the problem facing young men in school. To see what educators would like our young people to read, I chose an article titled "20 Contemporary Books for Your High School Reading List" from a random Google search.

Here are some samples. In "Bless Me, Ultima," described as "a classic piece of Chicano literature," the protagonist learns a new kind of spirituality from a faith healer.

"The Hate U Give" tackles "themes of racism, police brutality, and societal injustice."

"Unwind" tells the story of the Second Civil War, which apparently was "fought over reproductive rights."

"Monster" tells the story of Steve Harmon, "a teenager from Harlem on trial as an accomplice to murder."

"Fast Food Nation" attacks elements of the food industry, "including the exploitation of minimum wage workers."

"The Things They Carried," a book about Vietnam, "will educate your students on the horrors of war."

"Nickel and Dimed" spurs "conversations about the causes and effects of income inequality."

"The Other Wes Moore" explores "the ways in which education, socioeconomic disparity, and parental support shape the individual."

"The Handmaid's Tale" describes a theocratic regime in which "women have no autonomy and are instead assigned to specific societal roles."

"Little Bee" stimulates discussion "about globalization and ways we can better protect the innocent."

The other 10, although not as overtly political, deal with cancer, "spirituality and nature," cloning, "well-meaning white parents," postcolonialism, "the harsh realities of poverty," more cancer, "dating, abuse, and identity," and American-style "fascism."

The one worthy book, Cormac McCarthy's "The Road," may be the single bleakest book I have ever read. Even by post-apocalyptic standards, it is a total downer. The movie version makes "The Walking Dead" look like "Hello, Dolly."

Given the books young people are assigned, It should not surprise that girls are an incredible 10 times more likely than boys to pick up a book and read it on their own.

Reading leads to better academic performance down the road. As of now, women receive very close to 60 percent of all academic degrees awarded, a disparity whose social consequences are even greater than the academic ones.

In creating "The Hunt," I harkened back to the books I was assigned to read in high school. I still remember them: "Call of the Wild," "Red Badge of Courage," "Annapurna," "Kon-Tiki," "Mutiny on the Bounty," "Men Against the Sea," "Huckleberry Finn" and "Lord of the Flies."

These books not only captured our attention and held it, but they also helped us boys envision our lives as men. We saw how courage, perseverance and self-reliance worked in the real world and why they remain essential virtues. 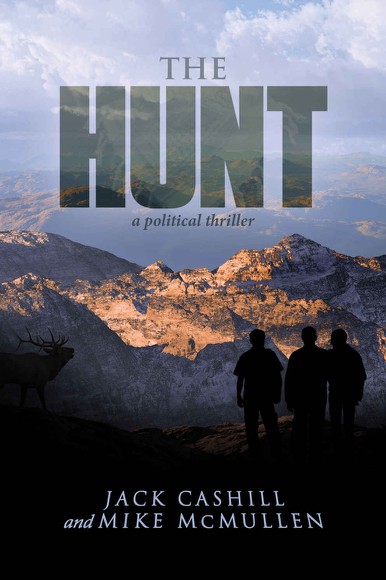 To honor this tradition, I recruited a writing partner, Mike McMullen, who is a skilled outdoorsmen. Although I am an Eagle Scout, I recognized that serious male fiction demands a level of authenticity beyond my experience base.

Together, we set out to write an action adventure novel that young men – men of any age – would actually want to read. That Mike has two sons in the U.S. Marines helped us define our audience.

The result is "The Hunt." In the book we tell the story of a recently widowed Army veteran who takes his adolescent sons on a character-building elk hunt to Colorado only to discover they are the ones being hunted.

The hunters are leftist anarchists in league with Muslim terrorists hell-bent on shooting the president's plane out of the sky. The incorrectness of the bad guys assures that no public high school anywhere will put the book on its reading list.

In an admirably concise summary, one reviewer wrote, "A beautifully structured and well written story. I can normally find something wrong with anything I read … not this time. It is close to perfect."

No book of the 20 I cited above, save perhaps for "The Road," deals in any of these virtues: perseverance, fatherhood, duty, self-sacrifice or redemption.

It is time to talk to your school board.

For a signed, first collector's edition of "The Hunt," please see www.TheHuntBook.com.