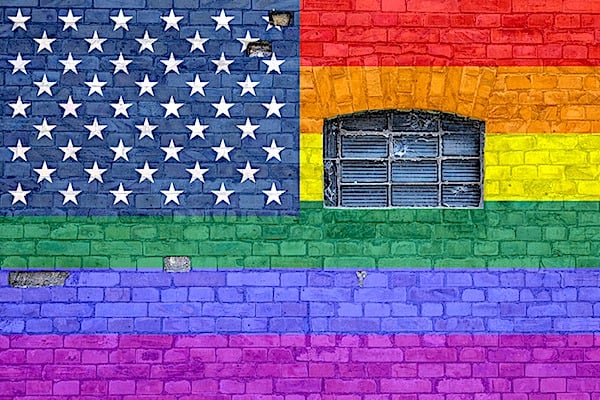 A legal group is challenging a Minnesota middle school's decision to fly a gay "pride" flag alongside the U.S. flag while rejecting requests to display other banners.

"Whether this was an inappropriate decision by a staff member or a deliberate violation of students' rights, this is a serious matter," said Thomas More Society Special Counsel Erick Kaardal, who is representing a group of residents of Marshall, Minnesota.

"At the very least, it's divisive and insensitive. It makes it appear that the school supports one group's beliefs at the expense of others," he said, referring to Marshall Middle School.

"It is incumbent upon school officials to write and enforce rules that prevent the public school from being turned into a forum for the display of a single ideology. As members of the academic community, these administrators should understand that you cannot trample on the right to free speech."

"Ironically, of course, the rainbow flag is most famous for being involved in protest, but now those advocating that symbol of protest will not tolerate the expression of opposing ideas," Kaardal observed.

Marshall Middle School serves 679 students in grades 5 to 8. The rainbow pride flag hangs in the school's cafeteria alongside the U.S. flag and a variety of international flags.

The legal team asked the district's records custodian in a letter for copies of all communications about the flag policies and practices, ranging from videos of school board meetings where it was discussed to emails to and from faculty members.

"Whether the school’s controversial display of the LGBT pride flag will result in a federal lawsuit remains to be seen, and will depend on how the Marshall School Board responds to the request for its written policies," the legal team said.

"School buildings are funded by public tax dollars," argued Kaardal. "A 'viewpoint neutral' policy toward flags and other displays will assure taxpayers that their money does not go to promote symbols of beliefs they may not agree with. If a federal lawsuit is needed to make this happen, we are equipped to pursue that action."

The letter also requests copies of communications and documents regarding "anti-bullying" policies and rules on the display of flags, the petitioning of school officials and the promotion of the LGBT flag.