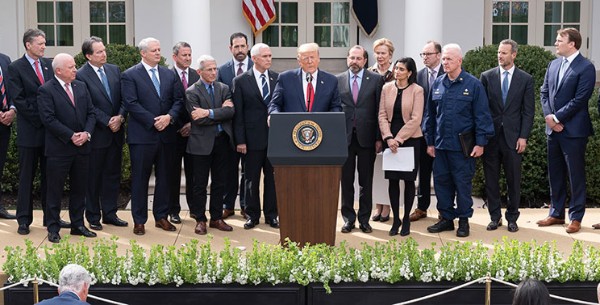 The lead author of a dire coronavirus study cited by the White House, Downing Street and other governments in their decisions to urge or impose unprecendented lockdowns and "social distancing" has drastically revised the estimated death toll of the pandemic in the U.K.

The study by Imperial College of London published March 16 estimated that 2.2 million Americans and 500,000 Britons could die.

Now, lead author Neil Ferguson has testified to a parliamentary committee that the U.K. death toll is unlikely to exceed 20,000 and could be much lower, reported the website New Scientist.

And more than half that number would have died anyway by the end of the year, because of their age and underlying illnesses, he told the panel on Wednesday.

The massive revision has significant implications for how governments are handling the pandemic.

The Economist reported last Friday that as governments around the world were "scrambling to get a grip on the covid-19 pandemic," the research by epidemiologists at Imperial College in London "helped change some of their approaches."

But Ferguson, reporting the figures, told the parliamentary select committee on science and technology he's "reasonably confident" that Britain's National Health Service can cope when the predicted peak of the epidemic arrives in two or three weeks, New Scientist reported Wednesday.

Alex Berenson, a former reporter for the New York Times, wrote on Twitter of the "remarkable turn" by Ferguson, who now has tested positive for COVID 19 himself.

"Essentially, what has happened is that estimates of the viruses transmissibility have increased – which implies that many more people have already gotten it than we realize – which in turn implies it is less dangerous," wrote Berenson.

The former Times reporter noted Ferguson credits the lockdown for the low figures, but the U.K. lockdown began only one day before his testimony Wednesday. In theory, Berenson points out, lockdowns take two weeks or more to show any impact.

Berenson commented: "Not surprisingly, this testimony has received no attention in the US – I found it only in UK papers. Team Apocalypse is not interested."

In the U.S., meanwhile, forecasters at the University of Washington's School of Medicine released a study Thursday estimating COVID-19 could lead to more than 80,000 deaths in the country by early April under the current lockdown conditions, Agence-France Presse reported.

"Our estimated trajectory of COVID-19 deaths assumes continued and uninterrupted vigilance by the general public, hospital workers, and government agencies," said Christopher Murray, the director of the university's

"The trajectory of the pandemic will change – and dramatically for the worse – if people ease up on social distancing or relax with other precautions," he said.