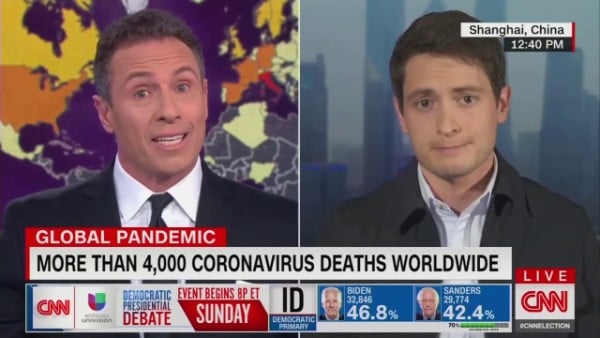 Establishment media figures such as CNN's Chris Cuomo are accusing Republicans of shifting blame and even racism for using the terms "Wuhan" or "Chinese" coronavirus, but they apparently are lacking in self-awareness.

The Media Research Center has posted a montage showing 35 instances of CNN and other major media outlets using the terms.

"We are starting to see a message shift here," Cuomo said on air Wednesday. "Because you are starting to hear the Republicans, especially Trump Co., calling it the Wuhan or the Chinese Coronavirus, they’re looking for someone to blame."

"Viruses don't have nationalities. This is racist," she tweeted in response.

Many have noted, however, that it's typical to name viruses for their location of origin, such as the Spanish and Hong Kong flus, and the zika and ebola viruses.

The coronavirus pandemic began in Wuhan, China, in December, and Republican lawmakers such as Sen. Tom Cotton of Arkansas, have said China should face "serious consequences" for its handling of the virus.

On the other side of the aisle, Sen. Dianne Feinstein, D-Calif., has warned of a "rise in racism" toward Asian Americans in reponse to the virus.

Rep. Alexandria Ocasio-Cortez said Tuesday night that racism was behind the downturn in customers at Chinese and Asian restaurants.