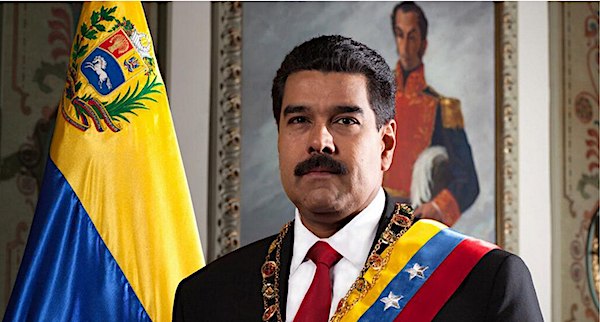 The Justice Department announced Thursday it has charged socialist Venezulan leader Nicolas Maduro of drug and trafficking-related crimes, including attempts to smuggle drugs into the United States.

The narco-terrorism count alone carries a possibility of 50 years behind bars. The DOJ noted the 57-year-old successor to Hugo Chavez often travels outside the country, and it is offering a $15 million reward for information leading to his capture.

Charges in Washington, New York and Miami also were filed against Venezuela's vice president for the economy, its minister of defense and Supreme Court chief justice.

The U.S. no longer recognizes Maduro as the country's president following an election that world powers concluded was illegitimate. Along with more than 100 other countries, the U.S. supports opposition figure Juan Guiado as the country's true leader.

"For more than 20 years, Maduro and a number of high-ranking colleagues allegedly conspired with the FARC, causing tons of cocaine to enter and devastate American communities. Today's announcement is focused on rooting out the extensive corruption within the Venezuelan government – a system constructed and controlled to enrich those at the highest levels of the government. The United States will not allow these corrupt Venezuelan officials to use the U.S. banking system to move their illicit proceeds from South America nor further their criminal schemes."

U.S. Attorney Geoffrey S. Berman said the "scope and magnitude of the drug trafficking alleged was made possible only because Maduro and others corrupted the institutions of Venezuela and provided political and military protection for the rampant narco-terrorism crimes described in our charges."

"As alleged, Maduro and the other defendants expressly intended to flood the United States with cocaine in order to undermine the health and wellbeing of our nation. Maduro very deliberately deployed cocaine as a weapon. While Maduro and other cartel members held lofty titles in Venezuela's political and military leadership, the conduct described in the Indictment wasn't statecraft or service to the Venezuelan people. As alleged, the defendants betrayed the Venezuelan people and corrupted Venezuelan institutions to line their pockets with drug money."

Officials said the State Department, through its Narcotics Rewards Program, is offering rewards of up to $15 million for information leading to Maduro's arrest and conviction, and up to $10 million for some of the others.

The charges include participating in a narco-terrorism conspiracy, conspiring to import cocaine into the United States, using and carrying machine guns and destructive devices during and in relation to, and possessing machine guns and destructive devices in furtherance of, the narco-terrorism and cocaine-importation conspiracies.

The court documents allege that since 1999, Maduro and the others have run the "Cartel of the Suns," which "abused the Venezuelan people and corrupted the legitimate institutions of Venezuela—including parts of the military, intelligence apparatus, legislature, and the judiciary—to facilitate the importation of tons of cocaine into the United States."

"In his role as a leader of the Cártel de Los Soles, Maduro Moros negotiated multi-ton shipments of FARC-produced cocaine; directed that the Cártel de Los Soles provide military-grade weapons to the FARC; coordinated foreign affairs with Honduras and other countries to facilitate large-scale drug trafficking; and solicited assistance from FARC leadership in training an unsanctioned militia group that functioned, in essence, as an armed forces unit for the Cártel de Los Soles."

The coordinated indictments were also unsealed in Washington and Florida.

Fox News reported the announcement of the charges followed months of pressure by President Trump's administration on Maduro's regime.