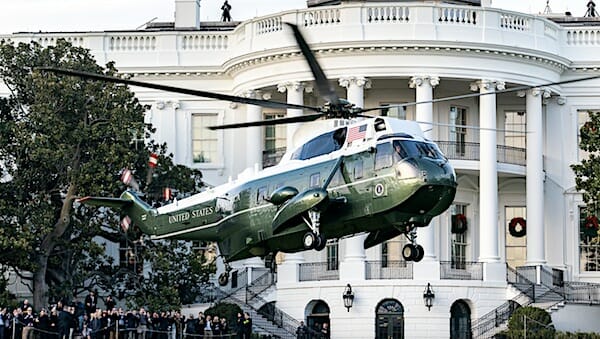 Marine One, carrying the first family, lifts-off Tuesday, Nov. 26, 2019, from the South Lawn of the White House to begin their Thanksgiving trip to Palm Beach, Fla. (Official White House Photo by Andrea Hanks)

2020 presidential candidates have been fudging the truth and walking fine lines as they vie for American approval on the national stage.

Candidates seeking the Democratic nomination have come under fire for exaggerated claims and straight-out lies, such as Sen. Elizabeth Warren’s claims that she was fired for being pregnant, Mike Bloomberg’s assertion that he led New York City through 9/11 or former Vice President Joe Biden’s claim that he was arrested by South African officials as a U.S. senator.

Warren Says She Has Cherokee Ancestry

President Donald Trump has jokingly called Warren “Pocahontas” in reference to the Massachusetts senator’s claim that she has Cherokee ancestry.

Warren said throughout her academic career that she has Cherokee ancestry, listing herself as “Native American” on a Texas state bar registration form in April 1986 and as a minority in the Association of American Law Schools directory from 1986 to 1995.

Warren has touted results of a genetic test showing that she had between 1/64th and 1/1024th American Indian ancestry as vindication of her claims.

The senator has blamed the “right-wing machine” for scrutinizing her claims of Cherokee ancestry, and her campaign website formerly blamed this right-wing machine for calling Warren “Pocahontas” and using “racist depictions of Native American history, culture, and people to make Elizabeth the butt of a joke.”

Warren later removed sections of her campaign website that showed results of the DNA test in August 2019.

“I led a complex, diverse city through 9/11, and I have common sense plans to move America away from chaos to progress,” Bloomberg said in the ad, titled “It Won’t Work.”

Bloomberg also exaggerated his influence on New York state’s 2011 legalization of gay marriage, saying Tuesday night at a Democratic debate that he “got the Republican state Senate to vote for gay marriage virtually before anybody else in this country,” when Democratic New York Gov. Andrew Cuomo and gay rights activists played a major role.

Warren Said She Was Fired For Being Pregnant

Warren has repeatedly said she was fired from her job as a special needs teacher because she was “visibly pregnant.” But the senator had another story in 2007, and documents suggest that Warren resigned from her job in 1971, The Washington Free Beacon reported.

“At the end of that first year, I was visibly pregnant,” Warren said during a September 2019 presidential debate. “And back in the day, that meant that the principal said to me — wished me luck and hired someone else for the job.”

But in a 2007 University of California at Berkeley interview, Warren instead blamed her departure on the fact that she lacked proper teaching credentials for a permanent teaching position.

“I did that for a year, and then that summer I didn’t have the education courses, so I was on an ’emergency certificate,’ it was called. I went back to graduate school and took a couple of courses in education and said, ‘I don’t think this is going to work out for me,’” she said in 2007.

She added: “I was pregnant with my first baby, so I had a baby and stayed home for a couple of years, and I was really casting about, thinking, ‘What am I going to do?’ My husband’s view of it was, ‘Stay home. We have children. We’ll have more children. You’ll love this,’ and I was very restless about it.”

Though Warren’s stories are contradictory, pregnancy discrimination was a disputed issue during the years after she departed her job.

Congress then passed the Pregnancy Discrimination Act in 1978, legislation that made it illegal to treat pregnant women differently to other employees “similar in their ability or inability to work.”

Biden Said He Was Arrested In South Africa As A U.S. Senator

Biden said multiple times throughout February that South African authorities arrested him in the 1970s while he tried to visit former South African President Nelson Mandela in prison.

“This day, 30 years ago, Nelson Mandela walked out of prison and entered into discussions about apartheid,” Biden told supporters in South Carolina in February, The New York Times reported. “I had the great honor of meeting him.”

“I had the great honor of being arrested with our U.N. ambassador on the streets of Soweto trying to get to see him on Robbens Island,” he said.

Biden would have been a U.S. senator at the time, and his arrest would almost certainly have been noted in the U.S. media, TheNYT noted. But newspaper found no relevant references to such an arrest in its archives and noted that Biden did not cite the arrest in his 2007 memoir.

Former U.N. Ambassador Andrew Young, whom Biden said was arrested with him, has denied that the story has true and said he was not arrested with Biden. He also told TheNYT that it is highly improbable that South African authorities would arrest a U.S. senator.

Biden later reversed his story, saying Friday that authorities merely “stopped” him rather than arrested him.

Biden has falsely said that the Obama administration did not “lock people up in cages” and that he immediately opposed the Iraq War. The former vice president also compiled three different stories into one inaccurate and emotional war story that he has told on multiple occasions.

Trump Promised Mexico Would Pay For The Wall

Trump promised to make Mexico pay for a border wall between the U.S. and Mexico, but the president has yet to follow through on this promise.

“The Wall will be paid for, directly or indirectly, or through longer term reimbursement, by Mexico, which has a ridiculous $71 billion dollar trade surplus with the U.S. The $20 billion dollar Wall is ‘peanuts’ compared to what Mexico makes from the U.S.,” Trump tweeted in January 2018. “[North American Free Trade Agreement] NAFTA is a bad joke!”

The Trump administration has “now shifted from securing funds to being able to build more wall,” a White House official told the Daily Caller News Foundation on Feb. 9. Acting Customs and Border Protection Commissioner Mark Morgan promised that the administration will build 1,000 miles of border wall along the southwest border of the U.S.

He also said he expects to meet Trump’s goal of erecting 450 miles of the new border wall by the end of 2020.

Some smart alternatives to college-degree tyranny