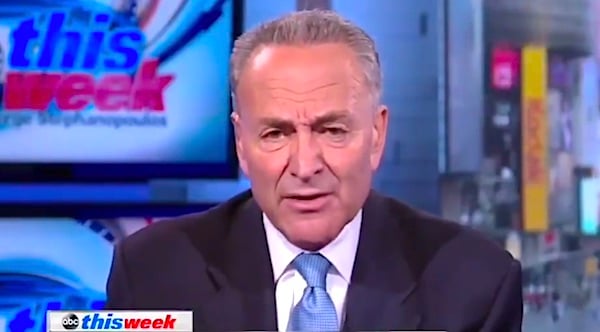 Last Wednesday, Schumer shouted during a pro-abortion rally in front of the Supreme Court building during a hearing on an abortion-related case: "I want to tell you [Neil] Gorsuch. I want to tell you [Brett] Kavanaugh]. You release the whirlwind and you will pay the price. You won't know what hit you."

Chief Justice John Roberts rebuked him for his "dangerous" threats, and Schumer later insisted he wasn't issuing a threat but refused to apologize or withdraw his words.

See Schumer's threat, starting about 2:13:25 in this video from a pro-abortion group:

On Twitter Monday, the president wrote: "That is far beyond simple rhetoric. That is a physical threat, or at least a threat that you better vote for us. Trouble ahead!"

Cryin’ Chuck Schumer said, “You will pay the price for this. You won’t know what HIT YOU.” That is far beyond simple rhetoric. That is a physical threat, or at least a threat that you better vote for us.” Trouble ahead!

A coalition of state attorneys general last week adopted a rebuke of Schumer.

Patrick Morrisey of West Virginia said, "Any person who professes to care about the rule of law and the impartiality of the judicial branch should roundly condemn @SenSchumer for threatening two Supreme Court Justices."

Fox New reported Sean Reyes, Utah's attorney general, called for a "censure" of Schumer for his "threatening remarks." A censure resolution was introduced in the Senate.

Ohio AG Dave Yost said Schumer not only was threatening the justices, "he threatened the rule of law."

In a Fox News commentary, Andrew McCarthy, a senior fellow at the National Review Institute, pointed out that Schumer, when confronted about his "menacing remarks," "brazenly lied about what he had done."

"The right to free speech under the First Amendment is not without its limits. Individuals are not free to issue verbal threats of physical harm," he said. "Several federal statutes make it a crime to threaten government officials, including judges."

Schumer has refused to apologize, although he admitted he "should not have used the words."

"My point was there would be political consequences for the president and Senate Republicans if the Supreme Court, with the newly appointed justices, stripped away the right to choose," he said.

However, his comments were directed to the justices, not the president or Senate Republicans.