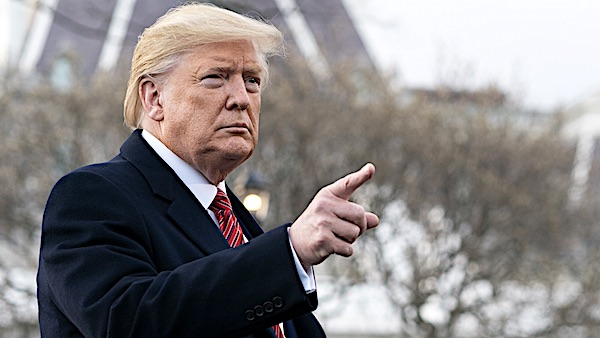 President Donald J. Trump speaks with members of the press along the South Lawn driveway of the White House Friday, Feb. 28, 2020, prior to boarding Marine One to begin his trip to South Carolina. (Official White House photo by Joyce N. Boghosian)

President Trump on Friday blasted a "fearmongering" NBC News reporter for asking a question about the millions of Americans who are "scared" about the coronavirus outbreak.

"I think that's a very nasty question, and I think it is a very bad signal that you are putting out to the American people," the president said to NBC's Peter Alexander.

"The American people are looking for answers, and they're looking for hope, and you're doing sensationalism, the same with NBC and 'Con-cast.' I don't call it Comcast, I call it 'Con-cast,' for whom you work," he said.

The Washington Examiner characterized the president's reply as "a personal rebuke."

"I say that you're a terrible reporter, that's what I say," Trump said.

Trump continued: "That's really bad reporting. And you ought to get back to reporting instead of sensationalism. Let’s see if it works. It might and it might not. I happen to feel good about it, but who knows? I have been right a lot. Let’s see what happens."

Trump was referencing his administration's actions on the outbreak and whether some treatments that are being reviewed will be effective.

The president later expanded on his concern about biased reporting.

"There is a lot of really great news and great journalism, and there is a lot of fake news out there. I hear it all and I see it all. I understand it all because I am in the midst of it. When somebody writes a story or does a story on television and I know it is false. I know it is fake, and when they say they have '15 sources have said,' I know there are no sources. They’re just making it up," he said.

The Gateway Pundit noted the mixed chloroquine and Z-Pac treatment touted by the president so far has been 100% effective.

The White House later released a list of the president's actions to protect the border, including agreements with Canada and Mexico to restrict cross-border traffic and a plan to "return aliens who cross."

"President Trump acted early and decisively to restrict travel from impacted areas and continues to do so," the statement said, including from China, Iran, Europe, the U.K. and Ireland.

And there was a travel advisory warning Americans to avoid all international travel.