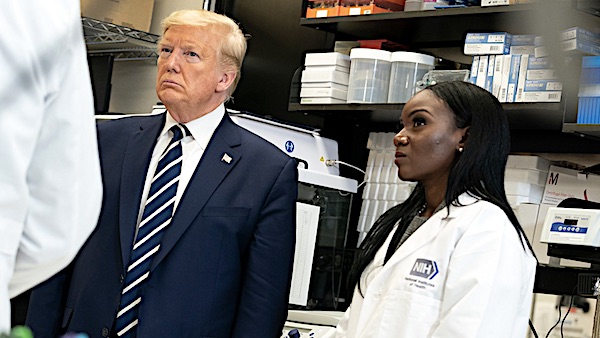 At a news conference at the White House Monday afternoon, President Trump said it might be July or August before restrictions in response to the coronavirus pandemic are lifted and the nation returns to normal.

"Mr. President, a lot of people are concerned about how long all of this might last," he began. "Do you have any kind of estimate, that if Americans really were to band together and do what the White House is suggesting, how quickly could you turn this corner?"

Trump said it's a question he asks his chief health expert, Anthony Fauci, and other advisers every day.

"It seems to me that if we do a really good job, we'll hold not only the death down to a level that is much lower than the other way, had we not done a good job, but people are talking about July, August, something like that," he said.

"It could be right in that period of time where, I say, it washes through," Trump added.

Roberts followed up: "So, is this the new normal until the height of the summer?"

"We'll see what happens," Trump replied. "But they think August, could be July. But I've asked that question many, many times."

At the news conference, the White House announced a set of guidelines in effect for 15 days that Americans should follow to prevent the further spread of the coronavirus.

Older people and those with underlying health conditions, for example, are advised to "stay home and away from other people."

The guidelines to combat the virus, Fauci said, are in effect 15 days at a time, after which they are reconsidered.

"It isn't that the guidelines are now going to be in effect until July," he said. "What the president was saying is that the trajectory of the outbreak may go until then. Make sure that we don't think that these things are solid, in stone, until July."

Trump added: "That would be the outside number."

The Dow reacted to Trump's statement that the crisis could last into the summer with its worst point drop in history, falling to its lowest level in nearly three years. Down 2,997 points, or 12.93%, the Dow close at 20,189.

The president, nevertheless, said that with "several weeks of focused action, we can turn the corner and turn it quickly."

"Our government is prepared to do whatever it takes," he said.

Trump was asked if the U.S. was headed into a recession.

Officials also recommended that everyone avoid social gatherings or groups of more than 10 people.

Americans also should work from home if possible. And they should avoid bars and restaurants, and "discretionary travel, shopping trips, and social visits."

The coronavirus pandemic has infected more than 169,000 people worldwide and killed more than 6,500. So far, more than 77,000 people have recovered from it, mostly in China.

The U.S. surgeon general warned Monday that infections will rise, pointing out the United States was at the point where Italy was two weeks ago.

"We are at a critical inflection point in this country, people," Surgeon General Dr. Jerome Adams told Fox News. “When you look at the projections, there's every chance that we could be Italy.”

He said, however, that the U.S. had opportunities to mitigate the pandemic.