President Trump has added six new nations to the list of those with whom the United States bans most travel and immigration.

While five of those nations are almost 100% Muslim, one of them – Nigeria – is nearly 50% Christian. The travel bans the president has imposed are not by religion, but by location. The reason, of course, is the drastic increase in Islamic terror attacks and the difficulty in determining who can safely be allowed to travel to the United States.

The increase in the number of attacks against Christians in the last year resulted in the State Department adding Nigeria to a "Special Watch List" on Dec. 18, 2019. The list is of governments that have engaged in or tolerated "severe violations of religious freedom."

For the most part the State Department cited the persecution of Shia Muslims, which is odd considering the number of direct attacks on Christians.

The travel ban proclaimed by President Trump, and the addition of Nigeria to the "Special Watch List" of nations that violate religious freedom are both steps forward to confront the Sunni Muslim president of Nigeria, who allows the attacks on Christians and actively suppresses the Shia Muslim minority. Still, much harsher action is needed by the American government.

Nigerian President Muhammadu Buhari blamed the opposition parties in Nigeria for the designation by the State Department. He claims "misinformation" was supplied to the U.S. government and that there is no religious repression in Nigeria.

Just prior to the 2019 presidential election, Buhari illegally fired the Christian chief justice of the Supreme Court, replacing him with a Sunni Muslim who had been a "Shariah judge" from a northern Muslim state. Former Chief Justice Samuel Onnoghen, a Christian, was removed one day before he was to swear in the new election panel. If the election results had been disputed, the Supreme Court would have had the final review.

Bluntly, President Buhari stacked the deck on the Court to make sure any "irregularities" in the election were not dealt with.

In his response to Nigeria being placed on the "Special Watch List," Buhari sited "the deliberate effort to give religious coloration to the farmers-herders clashes" in the Middle Belt. "Clashes"? How is an entire Christian congregation being hacked to death with machetes inside their church during a service a "clash"?

Buhari and his government consistently try to portray the slaughter of Christian farmers and the theft of their lands as something other than a religious war. It is about something else: It is about stealing Christian lands, killing the men and enslaving the Christian girls who are taken as "wives." 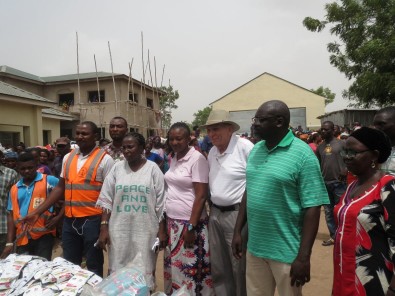 William J. Murray (in hat) with aid workers at IDP camp for Christians in Benue State (2018).

"IDP" is the official United Nations term for Internally Displaced Persons, in other words, people who are refugees in their own nations. All of the IDPs in Nigeria are Christians.

The orphanage supported by the Religious Freedom Coalition is located in Plateau State. That is one of the states in the so-called "Middle Belt" between the Muslim north, which is totally under Shariah law, and the southern states, which are controlled by Christians and are secular.

In January 2020 at least 32 Christians were killed, and during two nights of attacks last week, a church building and pastor's home were burned down in Plateau State by Sunni Muslim tribesmen. The Church of Christ in Nations (COCIN) building and the pastor's home were both destroyed in the predominantly Christian village of Marish on Jan. 27. Also, three communities in Bokkos County underwent a series of armed assaults. There was no reaction from President Buhari.

A few weeks earlier, four students from Aid to the Church in Need, a Catholic charity, were kidnapped and murdered. There are numerous murders of three or four Christians at a time that I have found in local Nigerian newspapers just this year that were not reported in the United States. Most times, unless the death toll is over 50 or 100, the stories never reach American news outlets. Also, there is little reporting about the many young Christian girls kidnapped for forced marriages, or the number of homes burned, or the victims maimed for life in machete attacks.

A harsher response from President Trump is needed. He has taken decisive action that has changed the relationship with Nigeria, but more needs to be done. Putting Nigeria on a list is not punishing the leadership enough to stop the violence. The Nigerian leaders must be hit in the purse to stop the violence, and the best way to do that is to sanction Nigerian oil output.

Nigeria is not a big player in the oil market, but the money that comes in from state oil sales funds a lot of the corruption. President Trump has cut off almost all exports of Iranian oil, showing that the United States does have the ability to do just that. Now it is time to bring the same sanctions against Nigerian oil exports.

Nigerian oil exports need to be brought to a halt until President Buhari understands that he must change course and stop the persecution of Christians. But does he really have the ability to do that?

If he won't, then I urge President Trump to take action – to sanction Nigerian oil now!