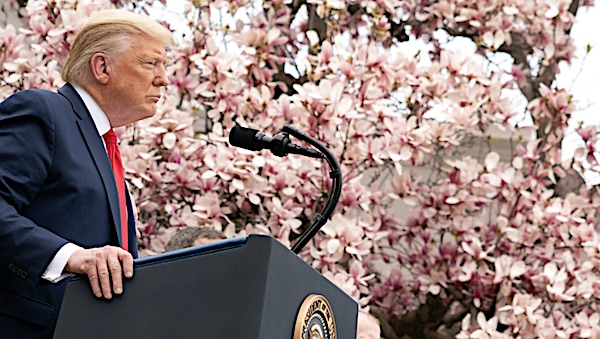 President Donald J. Trump listens to a reporter's question after announcing a national emergency to further combat the coronavirus outbreak, at a news conference Friday, March 13, 2020, in the Rose Garden of the White House. (Official White House photo by D. Myles Cullen)

President Donald Trump said Sunday that he is “strongly considering” a pardon for Michael Flynn, the former national security adviser who pleaded guilty in the special counsel’s probe to lying to the FBI.

Trump cited an unspecified report that the FBI and Justice Department “lost” records related to Flynn, a retired Army general.

“How convenient,” Trump wrote on Twitter. “I am strongly considering a Full Pardon!”

So now it is reported that, after destroying his life & the life of his wonderful family (and many others also), the FBI, working in conjunction with the Justice Department, has “lost” the records of General Michael Flynn. How convenient. I am strongly considering a Full Pardon!

Flynn pleaded guilty on Dec. 1, 2017, to making false statements in January 2017 regarding phone calls he had the month before with Russia’s ambassador.

Flynn, who replaced his legal team in June 2019, has recently filed motions to withdraw his guilty plea in the special counsel’s investigation.

“I am innocent of this crime, and I request to withdraw my guilty plea,” Flynn said in a Jan. 29 court filing.

Flynn claimed in the court filing that he entered a plea agreement because prosecutors threatened him with up to 15 years in prison and also threatened to file charges against his son.

Judge Emmet Sullivan, who is handling Flynn’s case, has delayed sentencing multiple times while he sorts out arguments between Flynn’s lawyers and prosecutors regarding the plea agreement. Sullivan said in January that Flynn may have to testify under oath before he will consider a plea withdrawal.

Flynn cooperated extensively with the special counsel’s probe as part of his plea agreement, as well as with prosecutors in Virginia, who filed charges against Flynn’s former business partner, Bijan Rafiekian.

Rafiekian was indicted on charges that he acted as an unregistered agent of Turkey while he worked for Flynn’s consulting firm, Flynn Intel Group. The company signed a $600,000 agreement in August 2016 with a shell company operated by a Turkish businessman with ties to the Turkish government.

Flynn and Rafiekian were aware that Turkish government officials provided guidance to the Turkish businessman, Ekim Alptekin, as part of the consulting agreement.

The Justice Department began investigating Flynn Intel Group in November 2016 for failing to register as a foreign agent of Turkey.

As part of his with cooperation the government, Flynn agreed to plead guilty to making false statements to the FBI in exchange for protection against charges related to his firm’s Turkey-related work.