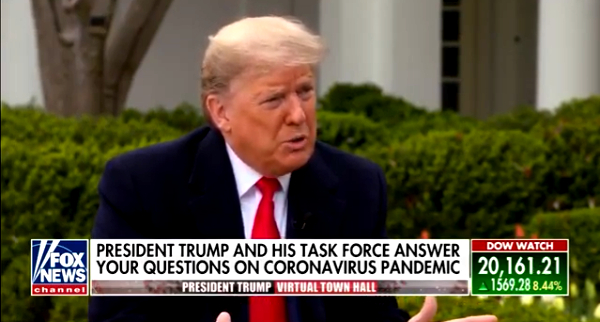 Amid a spike in coronavirus cases in the United States, President Trump said Tuesday he wants the nation's economy to be re-opened by Easter, arguing the extraordinary shutdown measures can do much more damage than the virus itself.

During a Fox News virtual townhall in the Rose Garden with other members of his coronavirus task force, Trump said he "would love to have the country opened up and just raring to go by Easter."

The holiday is April 12 this year.

Among the negative impacts of the shutdown, he said, is the prospect of "suicides by the thousands" that typically accompany a major economic downturn, FoxNews.com reported.

"We lose thousands and thousands of people a year to the flu. We don't turn the country off,” Trump argued.

"We lose much more than that to automobile accidents. We don't call up the automobile companies and say stop making cars. We have to get back to work," he said.

Previously, during the townhall, Vice President Mike Pence was asked whether the federal government is considering a nationwide lockdown.

"I can tell you that at no point has the White House Coronavirus Task Force discussed what some people call a nationwide lockdown, or as you describe a stay at home order," Pence said.

Following criticism Tuesday by New York Gov. Andrew Cuomo of the administration's response to a shortage of ventilators, Pence pointed out that the federal government sent 2,000 ventilators from the national stockpile to the state of New York.

He said 2,000 more will be sent Wednesday to New York, which has become the national epicenter of the virus. New York state now has more than 25,000 coronavirus cases, with about half in New York City.

Trump, during the Fox News townhall, called on the Senate to pass the nearly $2 trillion stimulus package, blaming House Speaker Nancy Pelosi, D-Calif., for the delay.

"I cancelled the deal last night because Nancy Pelosi put in a lot of things that had nothing to do with the workers," Trump said. "They start throwing Green New Deal stuff in, and the board rooms what they will look like. ... They have things that are just terrible, windmills everywhere."

Democrats complain the Republican-led draft doesn't provide enough health care and unemployment aid for Americans. And they want restraints on what they regard as a $500 billion "slush fund" for corporations.

Senate Majority Leader Mitch McConnell, R-Ky., said on the Senate floor Monday that Democrats "ought to be embarrassed" to trying to punish airlines over their "carbon footprint" while the economy hangs in the balance.

"This is no time for this nonsense," he said.