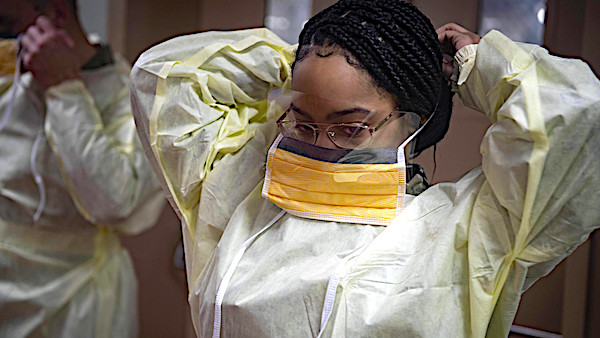 Navy Seaman Apprentice Kaylah Jenkins puts on personal protective equipment during infection control training aboard the USNS Comfort in the Atlantic Ocean, March 29, 2020. The ship is on its way to New York to support the nation's COVID-19 response efforts. (U.S. Navy photo by MC2 Sara Eshleman)

3M CEO Mike Roman fired back at President Trump for accusing his company of exporting N95 masks to overseas buyers at the expense of American health-care workers treating COVID-19 patients.

"The narrative that we are not doing everything we can to maximize delivery of respirators in our home country — nothing could be further from the truth," Roman said in an interview with CNBC.

Trump wrote on Twitter Thursday evening: "We hit 3M hard today after seeing what they were doing with their Masks. 'P Act' all the way," referring to the Defense Production Act. "Big surprise to many in government as to what they were doing - will have a big price to pay!"

Trump was referencing reports that U.S. officials were told by the company's distributors they were not allowed to buy the masks because they were reserved for overseas buyers.

In a company statement, 3M argued there are "significant humanitarian implications of ceasing respirator supplies to healthcare workers in Canada and Latin America, where we are a critical supplier of respirators."

"Ceasing all export of respirators produced in the United States would likely cause other countries to retaliate and do the same, as some have already done," the company said. "... That is the opposite of what we and the administration, on behalf of the American people, both seek."

'Executives who decided not to put America first'

On Thursday night, Jared Moskowitz of the Florida Division of Emergency Management, said in a Fox News interview he was told by distributors for 3M's products they could not sell him the masks because foreign countries were showing up "with cash" and buying them.

They said "they have no masks to sell me," he told host Tucker Carlson.

The issue is not the 3M workers, he said, it's "the executives who decided not to put America first."

"Since when do we have a company that sells masks, and I offer them money and they won't sell them to me?" he asked.

The New York Post reported 3M suggested it would not comply with a White House order to stop exporting masks to Canada and Latin America.