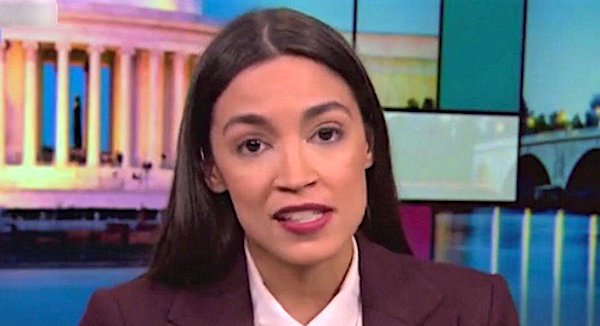 Rep. Alexandria Ocasio-Cortez, D-N.Y., among other things, threatened to delay the recent coronavirus bill in Congress, wants prisons abolished, called the Electoral College racist and warned that the world has only 12 years left because of global warming.

Summit News reported she says black and brown people have been victims of environmental racism.

"COVID deaths are disproportionately spiking in Black + Brown communities," she wrote on social media. "Why? Because the chronic toll of redlining, environmental racism, wealth gap, etc. ARE underlying health conditions. Inequality is a comorbidity. COVID relief should be drafted with a lens of reparations."

Why? Because the chronic toll of redlining, environmental racism, wealth gap, etc. ARE underlying health conditions.

Inequality is a comorbidity. COVID relief should be drafted with a lens of reparations.

Summit News said the congresswoman "provided no source to substantiate the claim that COVID-19 deaths were spiking in black or brown communities (coronavirus deaths would naturally be higher in any densely populated area), nor did she explain how the environment can be racist."

But one of her supporters responded to the tweet, Summit News said, "by suggesting there was some kind of conspiracy amongst store owners in black areas not to enforce social distancing properly."

Ocasio-Cortez previously waded into the coronavirus debate by demanding the FDA relax rules on blood donation, allowing homosexuals to donate blood despite a greater risk of infection.

She has argued that Congress members, with a salary of $174,000 a year, should get a raise to fight back against "dark money loopholes," meaning corruption.

The New York socialist has been a nonstop source of outlandish acts and statements.

Investigative reporter Sara Carter posted a video of Ocasio-Cortez being repeatedly corrected on policy, practice and law by an FBI agent.

She recently insisted on subpoenas for certain members of the Trump administration with security clearances because she feared they will be "putting nuclear codes in Instagram DMs."

She also has trashed people who pray, writing after a shooting, "What good are your thoughts & prayers when they don't even keep the pews safe?"

Then she added: "This is a time of great vulnerability for our communities. We must come together, fight for each other, & stand up for neighbors. Isolation, dehumanizing stereotypes, hysterical conspiracy theories, & hatred ultimately lead to the anarchy of violence. We cannot stand for it."

At a congressional hearing, she demanded that Wells Fargo CEO Timothy Sloan explain why his company was involved in caging children. He patiently explained the company wasn't engaged in any such activity.

She's also wondered whether it's OK "to still have children" in light of the world "ending in 12 years."

The congresswoman also was instrumental in convincing Amazon to cancel its plan for a second headquarters in New York City,that would have created 25,000 jobs.