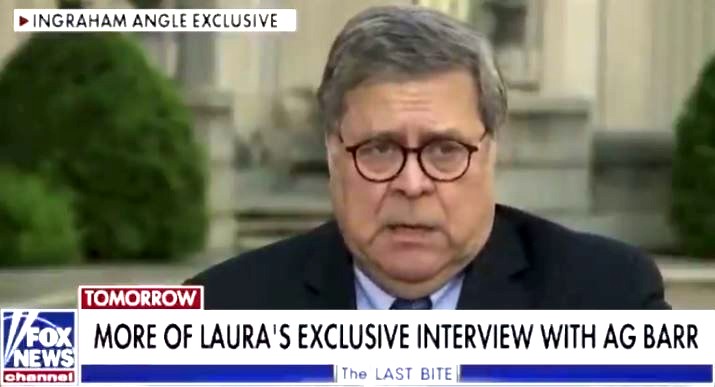 The Obama administration's counter-intelligence investigation of the 2016 Trump campaign was launched "without any basis," charged Attorney General William Barr in an interview to air Thursday night.

"What happened to him was one of the greatest travesties in American history," he told the Fox News Channel's Laura Ingraham.

"Without any basis, they started this investigation of his campaign," he said.

But "even more concerning," the attorney general said, "is what happened after the campaign "to sabotage the presidency."

Preview of pt 2 Barr interview with Ingraham: “What happened to POTUS was one of the greatest travesties in American history, no basis for this investigation, what’s even more concerning is what happened after the campaign, a whole pattern of events... to sabotage the presidency” pic.twitter.com/85YLJU6IIZ

Barr has appointed U.S. Attorney John Durham to investigate the origins of the Obama administration's counter-intelligence investigation of the Trump campaign, Operation Crossfire Hurricane. It's become a criminal inquiry.

The Obama Justice Department and FBI used a bogus, Democratic Party-funded, anti-Trump "dossier" based on anonymous Russian sources as evidence in its investigation.

On Wednesday, the claim that the Trump campaign collarborated with Russia in the hacking of Democratic National Committee emails was further undermined.

CBS News reported the newly published transcript of a conversation between George Papadopoulos and an FBI source shows the onetime Trump campaign volunteer repeatedly denied the campaign was collaborating with Russia or with outside groups like Wikileaks.

Yet government investigators did not include that material in their applications to obtain warrants to spy on Trump campaign adviser Carter Page, Justice Department Inspector General Michael Horowitz found in his review.

The IG also confirmed that the unverified dossier compiled by former British spy Christopher Steele was used as primary evidence to obtain the warrants.

Papadopoulus was among the first Trump campaign associates to face criminal charges related to the special counsel investigation. He was sentenced to 14 days in prison for lying to the FBI about contacts with foreign nationals.

In the interview with the FBI source, Papadopoulos said, "I know that for a fact" that no one from the Trump campaign had anything to do with the hacking of the DNC.