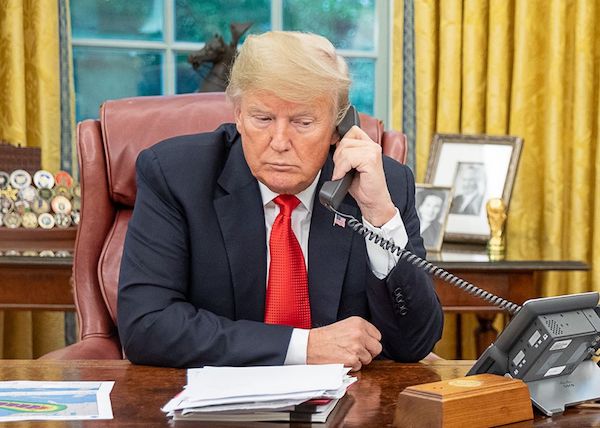 President Trump and presumptive Democratic presidential nominee Joe Biden had a telephone call about the coronavirus pandemic after agreeing to keep their comments confidential.

But Biden appears to have reneged on the agreement, the Washington Free Beacon reports..

In media interviews and meetings with donors, he "has laid out the specifics of the five suggestions he made to Trump on how the administration could improve its coronavirus response and even began to detail to donors at a fundraiser how Trump responded," the report said.

The president has not talked about the call, saying the two agreed not to discuss it publicly.

"We agreed that we weren’t going to talk about what we said, but we had a very, very good talk," Trump told reporters.

But Biden told a Philadelphia news station he recommended Trump that there should be a "federal responsibility" to the pandemic.

"And that I thought we needed one supply commander, nationally, and identifying where all the product needed was and how to distribute it around the country," he said.

"Biden on Wednesday continued to detail his call with Trump during a virtual fundraiser, according to Brittany Shepherd of Yahoo! News, who wrote in her pool report that Biden 'briefly touched on his phone conversation' with Trump during his meeting with donors. Biden not only went into further detail to the donors about what he suggested to Trump, but also how Trump responded, according to the report," the Beacon said.

The Beacon noted the Biden campaign did not respond to a request for comment. A White House spokesman also declined to comment on the call with Biden or any arrangement made to keep it private.