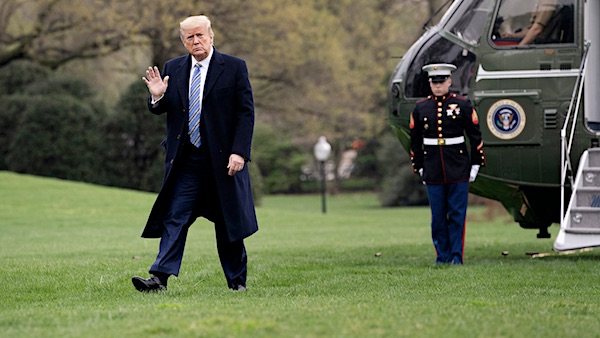 A key model used by the White House Coronavirus Task Force lowered its projection of coronavirus deaths in the United States by 25% in an assessement issued Wednesday.

The University of Washington's Institute for Health Metrics and Evaluation now forecasts 60,415 deaths, down from 81,766 in its previous report.

IHME's director, director Christopher Murray, explained in a press release issued Sunday that this institute's estimates "assume statewide social distancing measures are continuing in states where they have already been enacted, and for those states without such measures in place, it is assumed they will be will be in place within seven days."

"If social distancing measures are relaxed or not implemented, the U.S. will see greater death tolls, the death peak will be later, the burden on hospitals will be much greater, and the economic costs will continue to grow," Murray said.

The lowered projection comes as the the Centers for Disease Control and Prevention considers loosening its guidelines for self-isolation.

The plan is to make it easier for people who have been exposed to someone with the coronavirus to return to work if they are without symptoms, the Associated Press reported.

The CDC is considering an announcement in conjuction with the White House task force as soon as Wednesday, according to Vice President Mike Pence, who leads the task force.

The proposed guidance would also require people who go back to work to test their temperature twice a day and wear a face mask, the AP reported, citing a person familiar with the proposal.

Dr. Anthony Fauci, the task force's top infectious disease expert, said that amid "glimmers of hope," it "makes sense to at least plan what a reentry into normality would look like."

"That doesn’t mean we’re going to do it right now," he cautioned in an interview with Fox News. "But it means we need to be prepared to ease into that. And there’s a lot of activity going on."

She likely was referring to the models in a study by Imperial College of London.

The London team, led by Neil Ferguson, ran models based on three scenarios. If the U.S. did nothing to mitigate the spread of the coronavirus, they estimated 81% of the population would contract the disease and 2.2 million would die. In the U.K., the estimated death toll would be 500,000.

In a second scenario, the death rate could be cut in half through "mitigation," a combination of case isolation, home quarantine and social distancing of those most at risk.

The third scenario took into account the policy that largely has been adopted by the United States and other governments of "suppression." It combines case isolation, social distancing of the entire population, household quarantine and school closure. The measures, the researchers said, "are assumed to be in place for a 5-month duration."

On March 25, shortly after the U.K. issued mass-quarantine guidelines, Ferguson testified to a parliamentary committee that the U.K. death toll was unlikely to exceed 20,000 and could be much lower. And more than half that number would have died anyway by the end of the year, because of their age and underlying illnesses, he told the panel.