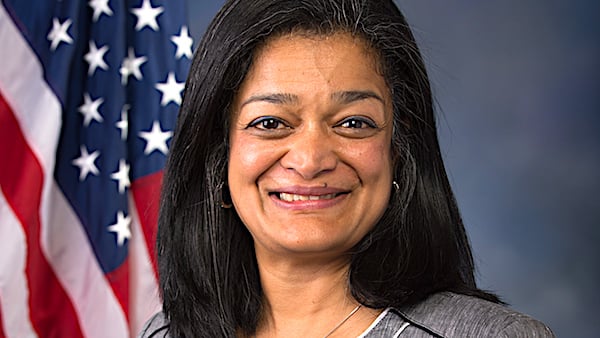 A House Democrat admitted she and her progressive colleagues are blocking relief to small businesses to gain leverage to advance their far-left agenda.

"We don't know what's in the package yet, we only know what's been reported," Jayapal said during the #PutPeopleFirst conference.

"But I think what you're hearing from all of us on the call is that we have real concerns about giving away leverage now without getting some of the priorities we need."

Video of the remarks were posted on Twitter by the Senate Republican Communications Center.

"Think about that: Democrats would rather use workers as partisan leverage than actually help them," the tweet said.

Also in attendance were members of the "squad" of far-left freshmen, Reps. Alexandria Ocasio-Cortez of New York, Rashida Tlaib of Michigan and Ilhan Omar of Minnesota.

Are lawmakers playing politics with the coronavirus pandemic?
99% (566 Votes)
1% (4 Votes)

One leading House Democrat came right out and said they've been blocking urgent money for workers' paychecks because they don't want to give up political leverage. Think about that: Democrats would rather use workers as partisan leverage than actually help them. pic.twitter.com/1Lve1xutb2

The proposed "Phase 3.5" of the coronavirus relief package is aimed at small businesses impacted by the shutdowns in response to the pandemic.

On Tuesday afternoon, the White House and congressional leaders announced an agreement on the core components of the relief bill.

Senate Majority Leader Mitch McConnell said Democrats have given up on a number of "unrelated demands" during the final stages of negotiations.

But he said the 12 days it took to reach an agreement is a costly delay for many American workers.