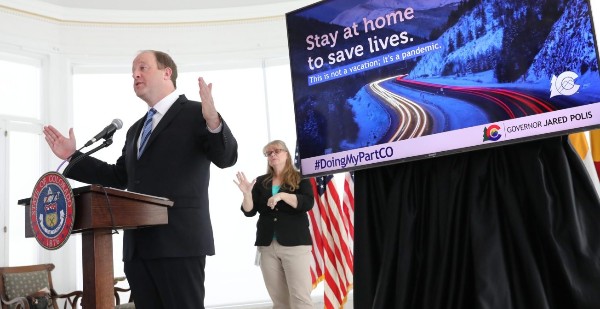 Amid fierce debate over the various approaches of governors to reopening their economies, the Democratic governor of Colorado is arguing that extending his stay-at-home order would have a "negligible impact" on the severity of the coronavirus' peak.

Jared Polis annouced this week a new phased plan beginning Monday that would include the partial reopening of offices and retail businesses, the Washington Examiner reported.

"Maintaining the stay-at-home order for an additional two weeks or even four weeks delays the peak, but it doesn’t really have anything more than a negligible impact in severity of the peak,” Polis said, citing a state model.

"The peak is essentially the same, it’s just a little bit later."

Polis said Wednesday that extending his stay-at-home order beyond its expiration date of April 26 also would inflict "very severe economic pain on people, but also hurts the will and psychological ability of the people of Colorado to be in this for the long haul in exchange for really no reduction in the number of ICU beds that we need at the peak of the crisis."

The new "safe-at-home" plan will permit some busineses to return 50% of their workforce to the office. Retail businesses can begin offering curbside service. The governor said his administration is still working on guidelines for bars and restaurants to reopen.

The guidelines maintain the use of masks, urge only necessary travel and continue to restrict public gatherings.

The editorial board of Colorado Springs Gazette noted Polis rebutted his state's coronavirus incident commander, who said the economy would stay closed until Polis could "make everyone safe."

"If any state, or any country, were to wait until we could keep everybody safe, we would have to be closed forever," said Polis.

The editorial board pointed out that most human decisions "balance the risk of death against potential reward."

The risk of cancer from exposure to the sun, for example, could be greatly reduced by forcing everyone to stay at home with the exception of "critical" errands.

There's more data now to assess the risk presented by the virus, the board argued.

"We should strive to soon determine, using data and science, whether economic shutdowns might cost more lives than they save," it said.

Meanwhile, Georgia Republican Gov. Brian Kemp's plan to reopen some businesses in his state on Friday, including hair and nail salons, drew a rebuke from President Trump when a reporter brought it up.

Trump said he "disagrees strongly" with the decision, noting his administration's rules recommend 14 days of declining new infections before moving to the reopening phase.

"I told the governor of Georgia, Brian Kemp, that I disagree strongly with his decision to open certain facilities which are in violation of the Phase I guidelines for the incredible people of Georgia," Trump said.

"At the same time, he must do what he thinks is right. But I disagree with him on what he's doing."

The Gazette editorial board pointed to new data that justifies reopening economies.

A recent study by the Imperial College of London in the Lancet Infectious Diseases journal found a person in his or her 20s who gets infected with the coronavirus has a 1% chance of serious symptoms.

The editoral board noted:

Of that small group, an estimated 0.031% will die. The risk of serious symptoms rises to 8% for those infected in their 50s. It climbs to 19% for those stricken in their 80s and older. Among the most vulnerable people who contract the disease and suffer serious symptoms, the death rate goes up to 7.8%.

Accounting for cases including those with mild symptoms, researchers estimate a death rate of 0.66% among those who contract the virus. The Centers for Disease Control and Prevention estimates 90% who die from COVID-19 also suffer from serious co-conditions that exacerbate the dangers of multiple other illnesses and common activities.

The most recent modeling predictions from the University of Washington predict COVID-19 will culminate in 60,000 U.S. deaths during what could be a one-season event.

"No one should downplay this human carnage, but we must maintain perspective," the board said. "The CDC estimates flu deaths in the U.S., for which we have vaccines, at 12,000 to 61,000 annually since 2010. Catching the standard flu means six months of immunity. Though the jury is out, researchers believe a mild case of coronavirus could establish up to 60 years of immunity."

Meanwhile, the partial closure of the economy has cost at least 26 million workers their jobs as of mid-April.  Shuttered businesses means "sudden poverty for millions of paycheck-to-paycheck workers and small-business owners" along with the underfunding of government assistance programs.

"To make 'everyone safe' — to save every life possible at any cost — we are swatting a deadly bug with a demolition mallet. We might destroy ourselves with unfathomable, deadly, long-term economic harm. We can only hope our leaders got this right."