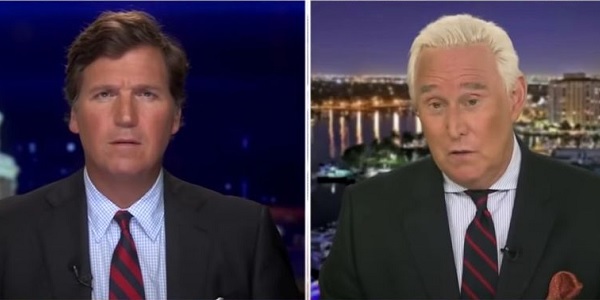 President Donald Trump on Friday called a judge’s decision to deny Roger Stone a new trial a “disgraceful situation,” and amplified a tweet calling for the GOP operative’s pardon.

Stone faces a “death sentence” if he is sent to prison due to the coronavirus pandemic, he told Fox News host Tucker Carlson in an interview hours before Trump’s tweet.

“At 67 years old with some underlying health problems including a history of asthma, I believe with the coronavirus it is essentially a death sentence,” he said.

Several high-profile federal inmates have recently been released from prison due to concerns about COVID-19, Carlson noted. The Bureau of Prisons will reportedly allow former Trump lawyer Michael Cohen to complete the final 18 months of his prison sentence from home confinement.

As of Saturday, the Bureau of Prisons has placed 1,252 federal inmates on home confinement. Eighteen inmates have died from coronavirus in federal prison, and another 465 have tested positive for COVID-19.

“One person who’s on his way to jail, maybe the only one in America, is Roger Stone,” Carlson said.

Stone sought a mistrial after social media posts surfaced of the jury forewoman at his trial tweeting negatively about Trump over the past several years. The forewoman, who had called all of the president’s supporters racist in one Aug. 2, 2019, post, denied holding negative views about Stone during the jury selection process.

“I was very hopeful that the motion for a mistrial in my case based on flagrant and blatant, even egregious, juror misconduct would have won me a new trial,” Stone told Carlson.

“In this case it is undisputible [sic] that the jury forewoman attacked both me and President Trump in 2019 social media postings, lied about that in jury selection, and then later deleted her Facebook page to cover her trails.”

Jackson sentenced Stone to 40 months in prison on Feb. 20. He said Friday he is scheduled to report to prison in two weeks, though he has 14 days to appeal Jackson’s latest decision.

Stone was convicted on charges of making false statements to Congress, obstructing an official proceeding, and witness tampering. All of the charges centered around the House Intelligence Committee’s investigation of possible Russian collusion with the Trump campaign.

The special counsel’s team charged Stone with lying to Congress about his conversations with Trump campaign officials and other associates about WikiLeaks’ plans to release Democrats’ emails during the 2016 election.

Neither Stone nor any Trump associate was found in the special counsel’s investigation to have aided Russia or WikiLeaks in stealing or releasing the emails.

Trump has not said whether he will pardon Stone, who he has known for more than four decades, but he has hinted in the past that he is considering it. On Feb. 12, he suggested the possibility of “prosecutorial misconduct” in Stone’s case.

He commented Friday on a tweet from conservative activist Charlie Kirk, who called Jackson’s decision a “disgrace.”

“RT for a FULL PARDON of Roger Stone!” Kirk wrote.

Trump commented: “This is a disgraceful situation!”